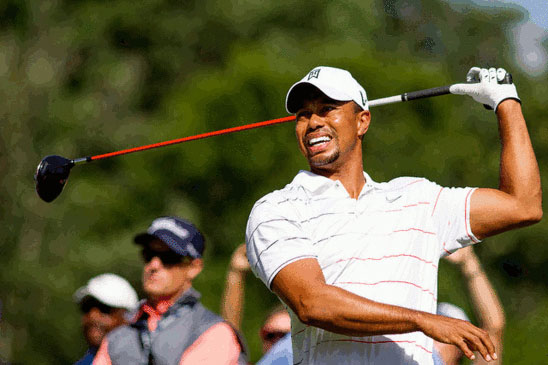 Not Out of the Woods Yet.

Tiger has new mate; has he healed his monstrous ego along with his supposed sex addiction?  Will he reoffend?

(SNN) - Golf sensation Tiger Woods and Lyndsey Vonn, world champion olympic alpine skier, have emerged on the world stage to announce that they are now officially a couple, both asking for privacy and the right to keep their romance to themselves. I say no way. When you attach a full set of carefully posed professional photographs of yourselves at the same time you plead for privacy, the dichotomy seems to be a tricky way of ensuring more attention...like saying HERE WE ARE, THIS IS WHAT WE LOOK LIKE, WE'RE ULTRAFAMOUS BUT STILL NEED MORE ATTENTION SO SENDING SOME UP -TO-DATE PICS . THANK YOU.  Oh that Tiger, what a character.

Seeing his toothy (all Tigers are toothy) smile again prompted me to do a little research on Tiger.  Here is what I found so far:

1) All tiger's hunt at night as we know from Tiger's escapades a few years ago, proving he is more cheetah than Tiger, by getting himself in hot water by hanging around cougar dens.

2) A tigers roar can be heard up to two miles away, explaining the neighborhood wakening abruptly during the now-famous incident of Tiger hitting a tree before he was barely out of the driveway (they aren't good drivers either, apparently) and the even bigger incident upon learning of his tomcatting around.  Witnesses were unable to confirm whether it was a nine iron or a full fledged driver that then-wife Elin, used only to 'free Tiger from the wreckage' (rather than wacking him like many suspect), but they all agree it likely wasn't a putter.

3) Tigers are territorial, and true to Tiger's feline nature - their social system is connected through vocalizations, visual signals, and scent marks.

4) Tigers do not mate for life, as Elin and the rest of the planet were shocked at abruptlylearned in late 2009; World Champ Ms. Vonn must have been dominating the slopes at 60 km an hour and missed it, or perhaps she feels she can tame the wild beast within Tiger and find the monogymous putty-tat inside, should there be one.

It's a wait and see game to the world, probably bets taking place right now, but hopefully all will go well as long as Tiger keeps his paws (and, uh, putter) to himself.  Otherwise it will be a ski pole coming at him next time rather than a golf club.