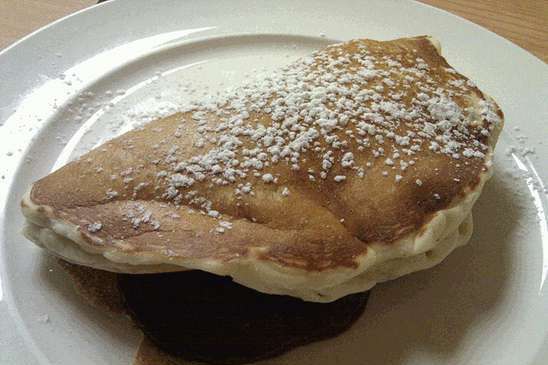 (SNN) - Food fights have been around forever, messy but harmless, until this week when the Castle View School shocked the world by banning the triangular-shaped flapjack for its apparent ability to injure, blind, maim, mutilate, dismember and in extreme cases, potentially murder a human target.  The Essex, England Canvey Island school took prompt and swift action after a pupil was struck in the pupil by a flying flapjack.

Catering staff at the Castle View secondary school have been instructed to cut slapjacks into only rectangle or square shapes, the logic of which escapes me.  I'm no mathametician, but it doesn't seem like a far stretch to realize that square/rectangle shapes add one more sharp corner per fearsome flapjack (now referred to as slapjacks) thereby increasing the risk of scratches, cuts, flesh wounds, gashes, extreme blood loss and pokes to the eye arising from food fights.

I would be curious to see the ingredients in the English recipe for flapjacks; it must be a pretty heavy concoction if it can disfigure those unfortunate enough to happen to be in the line of an unsuspecting slapjack takedown. Next thing we know, there will be a movement seeking official forbiddance of asparagus 'spears' and carrot 'sticks' in schools, claiming sticks and spears are high risk and have no place in canteen food fights.

Amazingly, this is not the first time flapjacks have been banned.  Michael Gove, Education Secretary, was heading into a cabinet meeting with fresh flapjacks made by his wife, when he was stopped and detained by security personnel who then explained that flapjacks are a security risk and confiscated Gove's pancakes before he was allowed to enter the meeting.

In light of the ban on flapjacks, perhaps a Canadian answer to the replacement of the perilous slapjack might be our light and fluffy pancakes that happen to soar through the air with the greatest of ease; no edges, no pain, never exceeding the speed limit thus are easy to catch, putting the fun back in foodfights.

But hey, in conclusion, never mind the abolition of triangular flapjacks or replacing with pancakes, everything written above is moot, really (except the young man who was hurt in the food fight incident who should never have found himself in a food fight) BECAUSE THE SCHOOL SHOULD HAVE A ROCK SOLID REPERCUSSIONS POLICY IN PLACE APPLICABLE TO ANYONE WHO GETS CAUGHT THROWING FOOD.  Castle View is a secondary school, I'm almost positive the Castle View students are old enough to control their food from flying off their plates.

Photo by: Andrew Currie's flickr photostream, Some Rights Reserved, The Sage nor this article endorsed