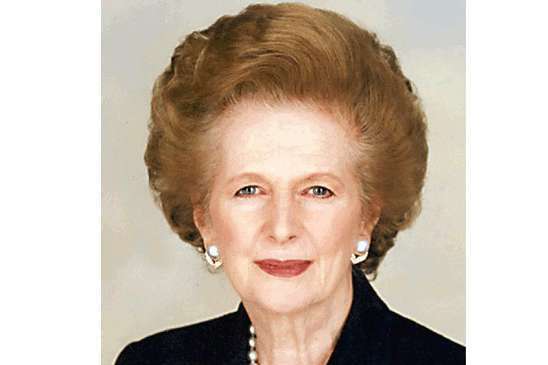 (SNN) - There is a famous sketch from the 1980’s British satirical TV show, Spitting Image. Prime Minister Thatcher is treating her Cabinet to a restaurant Meal:

Waiter: “What would madam like?”
Thatcher: “I’ll take the Steak – Raw”
Waiter: “And the Vegetables?”
Thatcher” They’ll have the same.”

The reasons that this was, and is, funny to Brits really illustrate the prejudices that Baroness Thatcher faced throughout her political life. The fact that she ruled with an Iron Fist was likened to that of a husky-voiced nag, bossing around every man that she came across, like the Mothers and Wives that most men fear. She was even painted as someone in a suit and tie and a cigar in that show, with the low, upper-class, despotic voice. The fact also that she ordered rare meat made her somehow feral. Not to mention, apparently going out to eat in a restaurant, when the headlines let us think that people were starving at the same time.

This was the popular view of the more socially minded young entertainers and writers of the early 80’s. Personally, I`ll never forget the summer of 1984, when I left drama school and embarked on a professional acting and comedic career. It was the summer of the end of the Miner`s riots, where I watched news footage of Mounted Police charging at miner`s picket lines, batons flailing when race Riots flared throughout the country: `In Britain`, I thought, incredulously. I blamed her Conservative party for it all. In fact, I used to blame her personally for my move to North America, as if she personally had kicked me out of the country.

A quarter of a century more mature – or at least older – I know, now, that a leader is simply a mouthpiece for party policy: The fact that she was the first woman to lead a major party through an election campaign, and see that their promised policies were put into place, without brooking any argument or altered real-life situation to hold those plans back, merely means that she was successful. To do so with the most outrageous and striking change in social policies in British history was a major set of achievements. In fact, it wasn`t long before her sidekick, the Boy Wonder Reagan, did the same in the States, and then – seemingly – the rest of the world followed her, deciding that ‘The Market’ was the Oracle of Delphi, and was not to be questioned. I frequently labelled these Tory policies as `Monopoly Politics`: It only mattered how many houses you could put on a square, not how many people lived in the little houses at that address, they didn`t matter.

In reality, after years of Labour party socialist politics, the power of Trades Unions, the growth of larger benefits for less work, during shorter working lives meant the British economy was stuck so solidly in the 1960’s, Austin Powers could have been the Prime Minister. The Conservatives decided that this had to change, but to do it in less than a decade was way too much bad medicine, too soon for many of us. In our house, my Father `always had voted labour, and always would`, a proud Trades Unionist, his Maggie-hatred was almost visible. My mother, who had always said ‘it was time to get a woman in there and clean things up’, voted Conservative twice. There were loud arguments, believe me. The pendulum lurched hard right, and ended the only way it could. She was dumped when she became unpopular with the very people that had put her in power, the Tories replaced her with an accountant named John Major, and they continued to finish off the work that she had been the Press Relations Officer for, for the previous decade. When they finally lost, Tony Blair`s New Labour took over with almost identical policies but dressed up as Socially minded: Stock ownership became Community Ownership, for one.

This way of life, this entrepreneurship, you-can-do-anything-you-want, greed above all else system, topped out thirty years later with the financial crash of 2008 – the logical end to market-friendly politics gone wild. When it became clear that the only way the smaller European countries could really be on the same level as the giant Germanies of Europe was by being their servant, and lying about how much money they had in the bank. Where twenty-something slackers earned millions in free money from investors for inventing Computer Apps. that never made any money, and where the India`s and Pakistan`s only get on, was by exporting their human future to the West.

It`s the Thatcherite Legacy: Britain is back, and not a laughing stock. Fast money, no matter its provenance, floods the system to allow some people to go abroad and act superior to Mediterranean peoples, and where the brown skinned are still slaves to the white man – but now, they’re your neighbor. The rest of the working class are exactly where they were before, but with less government money to live on. When the pendulum starts its return, watch out for it to sweep all the way back to Afro’s, Flairs, and Disco music. So, now I’m older, and more cynical, how does my memory see Margaret Thatcher, now?

She had an incredible life, made a huge success of herself, and her career. She joined a political party at its nadir, shared its lofty, long term ideals, did whatever she could to make it work, and as fast as possible, and got her party in power for three consecutive majority governments. She turned the entire ship around, had the entire global fleet follow it, only to have it face a different iceberg a little further off.

She was a great politician, and had nerves of steel. I hated her policies and methods, but I don`t think that she ate her steak raw.

Steve James is an Actor, Stand up and Comedy writer in Vancouver BC. When he first came to Canada, he realised the true nature of political hatred, when he heard people discussing Brian Mulroney.

Photo by: LCBGlenn's flickr photostream, Some Rights Reserved, The Sage nor the article endorsed.