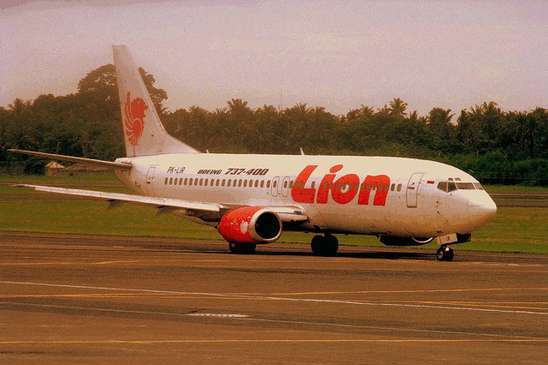 (SNN) - Lion Airlines has missed the tarmac for the third time in its flight history, with one of its Boeing 737s overshooting the Bali runway and plunging headlong into the sea. Though everybody on Flight 904 survived, witnesses said that many of the passengers were heard cussing and swearing as they dog-paddled their way to shore.  Lion Air spokesman, Edward Sirait, said that the plane failed to reach the runway and, uh, "fell" into the sea.

Risking its status as an equal opportunity employer, Lion Airlines has stated it will no longer hire nearsighted pilots.  Also, as a precautionary measure, each Lion Airlines airplane will have a new, state of the art progressive bifocal windshield installed.  Representatives are hopeful that these moves will gain the trust of Europe and North America where Lion Airlines is banned after failing to pass a safety audit.

Other than his eyesight, the airline captain is said to be in a state of good health. The Flight 904 incident is the latest in a string of Lion Airlines accidents but is the first to insist that the presence of cumulonimbus clouds at the time of the approach were likely at fault.  The Indonesia National Transportation Safety Committee is leading the ongoing investigation.

Photo by: calflier001's flickr photostream, Some Rights Reserved, The Sage nor this article endorsed

DISCLAIMER: The above article is provided for entertainment purposes only and the article, image or photograph held out as news is a parody or satirical and therefore faux in nature and does not reflect the actions, statements or events of real persons. The opinions, beliefs and viewpoints expressed by the authors of The Sage Satire and forum participants on this web site do not necessarily reflect the opinions, beliefs and viewpoints of the The Sage News Network or the official policies of the The Sage News.
More from Joanne Hagen