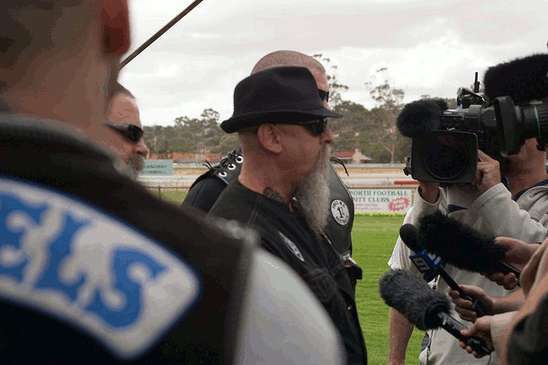 (SNN) – The Hell’s Angels, one of Canada’s most powerful motorcycle gangs, have thrown their support behind Barack Obama in his efforts to implement gun control reform.

“I am disappointed that the U.S. Senate did not pass Obama’s bill,” said John Firepower, leader of the Hells Angels' south chapter, who is currently sought on a Canada-wide warrant for gangsterism and drug trafficking. “Americans desperately need tighter controls around the use and possession of firearms.”

Obama’s campaign to introduce changes to its gun control legislation came to a temporary standstill when the Senate voted down a package of gun reforms, including increased background checks and a ban on assault weapons and high-capacity magazines. The bill was shot down by a 54-46 vote. The majority of those opposed were Republicans.

“Protecting people from gun violence should be a number one priority, and those measures are a first step to increasing that protection,” says Firepower. “I’m flabbergasted that Senators did not see the value in the proposed measures.” Firepower states however that his disappointment is short-lived as he has other business to attend to.

First gang leader to mandate compliance with Canada’s gun control laws within the motorcycle gang community, Firepower is noted for introducing secure non-portable containers for the storage of restricted and prohibited firearms in all of the Hells Angels' bunkers in Quebec. The organization owns a large percentage of the firearms on the market today, and works in close collaboration with The National Weapons Enforcement Support Team (NWEST) in combating the illegal movement of firearms.

“Our members comply with the requirements of the Firearms Act and regulations. All of our firearms, restricted, non-restricted and prohibited, are registered with the Commissioner of Firearms. Our members have also successfully completed the Canadian Firearms Safety Course and tests, and received supplemental training in the safe handling, use and identification of prohibited firearms, prohibited weapons, prohibited devices and prohibited ammunition.”

Police Commissioner Bill Detective supports the Hell’s Angels leader, saying that Firepower is probably the most important gun control supporter to have been arrested in the last few years. “People should listen to him,” says the Commissioner.

Photo by: Roy Lister's flickr photostream, Some Rights Reserved, The Sage, nor this article endorsed.