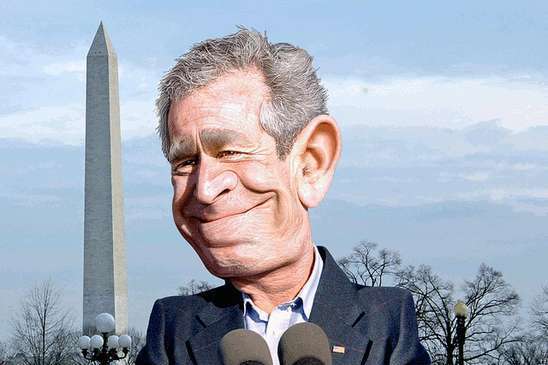 (SNN) - Every now and again, the real world serves up such an unexpected comedic gift it makes you think that God is looking after you, after all. The announcement this week that the President George W. Bush Presidential Library is opening was the cue for many online comic observations:

“Does it supply it’s own crayons?’, and “It’s probably only open two days per week.”, were obvious, but I particularly liked: “ it’s run by Vice President Cheney.”

This did lead me to think though, that there doesn’t appear to be many legacies left for our own Prime Ministers. There is, apparently, a range of Mountains named for them but, in a purely Canadian gesture of humility, no-one knows where they actually are. Shouldn’t we put something in a downtown area? After all, just a handful of names have been running our political lives since I landed in the country. It would be easy to start this trend, now, and honour PM’s from the last quarter Century.

Brian Mulroney’s would be obvious – the Memorial Public bathroom. Inexpensive to run, it would require no building, simply an upgrade from an existing facility making it more slick and urbane. Montreal is always looking to better its infrastructure, and it could easily be completed by a local contractor with an Italian name, only charging three times what it’s worth. To pay for ongoing upgrades to the facility, guests would be encouraged to leave a small donation in a brown envelope stashed behind a pipe under one of the wash basins.

Out here on the West coast, Vancouver could similarly honour Kim Campbell. How about simply anointing one of the Starbuck’s coffee houses in town (there are several thousand to choose from in the downtown square mile.), as the Prime Ministerial hang out. Featuring a completely vanilla menu, it would recognize the cup of coffee she almost had time to finish while in office.

Jean Chretien’s would be easy, of course. The Honourable JC’s Golf club could still be built and opened before he died – just. Special golf balls would be wonderful visitor’s gifts, and it could even dedicate its Accountant’s office to Paul Martin. After all, even a legacy building needs sound financial leadership, and he did so much to ensure that the country ran like a Fortune 500 company while he was running its finances: This honorific would also help people forget that he didn’t do too much while living at Sussex Drive.

Which, of course, brings us to our current PM. Who knows what Legacy Stephen Harper will leave? We must be reaching the point when he has achieved everything he can in the office. We don’t know what he really wants, of course. Message control from the PMO is tighter than a public Marathon Security at present. Perhaps a suggestion would be the Honorary F-35 fighter jet, the ‘PM Stephen Harper’. It would be late, of course, not really equipped for the job, and cost taxpayers a sum of money rivalling a Kardashian wedding, but it would help his name live on – at least in a hangar somewhere.

So, now I’m off to Texas to see what possible stock would be carried by a library dedicated to ‘carrying on the work of George W. Bush’s Presidency’: I could do with a copy of ‘50 Shades of Grey’ set in Guantanamo Bay.

Steve James is an Actor, Stand up, and Comedy writer in Vancouver BC. He is currently hunting down his library card.

Photo by: DonkeyHotey's flickr photostream, Some Rights Reserved, The Sage nor this article endorsed.