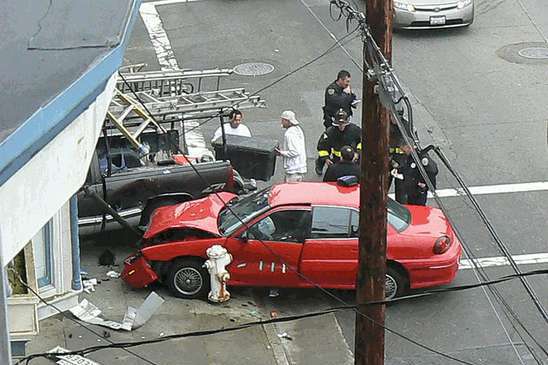 (SNN) - Cities across Canada were thrown into chaos on March 24, 2013 when thousands of women went out in public without any makeup in celebration of National No Makeup Day.

Over 400,000 vehicle and pedestrian accidents were reported in all major cities, as drivers became distracted by the women who opted to forgo cover-up, mascara, eye shadow and lipstick before going outside.

Brian Macho, a driver involved in a 3-car accident in downtown Ottawa, says that he was stunned to see women walking around in public without makeup. “I’ve never seen anything like it! There were a bunch of women with no lipstick, waiting to cross Bank Street. I was so surprised, I never saw the other cars.”

The impacts of National No Makeup Day were also felt in the U.S. were the number of accidents on this day were equal to the overall monthly average. In New York, 35 cars were involved in a pile-up on East 45th Street when drivers spotted rocker Marilyn Manson completely barefaced. Sixteen people were taken to the hospital. One man lost his eyesight after his pupils over-dilated at the sight of the heavy metal singer looking halfway human.

According to spokeswoman, Edna Zitless, the increase in the number of beautiful women was so significant, that drivers were caught unawares. Government officials are now looking at implementing a national communications strategy leading up the National No Makeup Day next year to increase awareness and decrease the element of surprise among citizens and drivers.

Photo by: Tommie and Georgie flicfr photostream, Some Rights Reserved, The Sage nor this article endorsed.