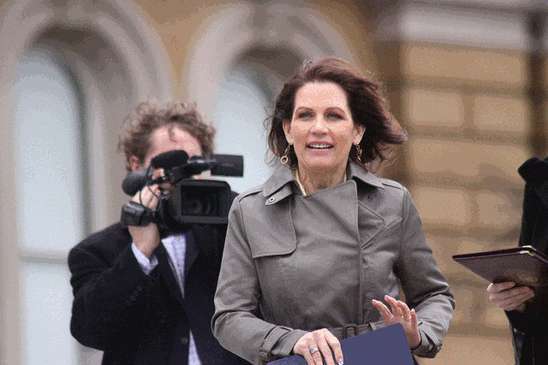 Bachmann Gets 'Stamp of Approval' from Klobuchar and Franken

(SNN) - An unnamed source, who is not authorized to speak to the press, speaking on condition of anonymity, through an intermediary using a voice scrambler, revealed the true reason Michelle Bachmann is not seeking re-election to Minnesota’s House of Representatives nor making another run at the presidency. “Ms. Bachmann has grander plans, yes, even grander than the White House.”

According to the source, Bachmann, known for such statements as, "Before we get started, let's all say 'Happy Birthday' to Elvis Presley today," (on the anniversary of his death), and most recently her claim that Minnesota would incur a reaction from God similar to His reaction to Sodom and Gomorrah for passing the gay marriage amendment, is in collaboration with Senators Amy Klobuchar and Al Franken regarding a unique opportunity: postal stamp adhesive.

“It turns out,” says the unnamed source, “that Monsanto is deep in research to improve the efficacy of stamp adhesive, with the added attraction of genetically marking it to assist in tracking down misuse of the US Postal Service.” It seems that by DNA marking the adhesive, the USPS will be better able to track down the suspects in cases of terrorism through mailing dangerous materials intended to inflict harm – biological weapons for example. The DNA marking agent? Bachmann’s. “Soon, Bachmann will be spread across the country, in every home, business, and office, including the Oval Office,” according to the source.

A scientist familiar with Monsanto’s research confirms it is possible to DNA-tag adhesive utilizing a proprietary technology pioneered by the company’s Genetics Modification Office, or GMO. “I have it on good authority that a portion of Bachmann’s DNA is statistically identical to the DNA of the starch used to manufacture postage stamp glue.” According to the researcher, a relative of his, whose name he is unwilling to divulge at this time due to intellectual property issues, has extracted portions of Bachmann’s DNA and inserted it into the DNA of the starch, thus rendering it immune to modification, replication, and tampering. “The targeted DNA segment, officially known as the BeTaAp chain, is shown to determine the mass and volume of a mammal’s brain. The extracted sample, tagged as BachLA-1, is identical to the starch’s overall size-determining DNA. A perfect match.”

Klobuchar and Franken are credited with introducing Bachmann to their friends at Monsanto, arranging for in-depth discussions, strategy meetings, initial laboratory appointments, and intellectual property guarantees. There is no word on whether financial arrangements were discussed in the meetings, but Klobuchar, Franken and Bachmann all emerged from the most recent talk with expansive grins and cell phones to their respective ears.

There is no announcement when the new, genetically modified stamps will make their debut. The USPS will not confirm rumors that Bachmann’s likeness will grace the face of the stamps.

Photo by: Gage Skidmore flickr photostream, Some Rigts Reserved, The Sage nor this article endorsed.

DISCLAIMER: The above article is provided for entertainment purposes only and the article, image or photograph held out as news is a parody or satirical and therefore faux in nature and does not reflect the actions, statements or events of real persons. The opinions, beliefs and viewpoints expressed by the authors of The Sage Satire and forum participants on this web site do not necessarily reflect the opinions, beliefs and viewpoints of the The Sage News Network or the official policies of the The Sage News.
More from D. Scott Shultz