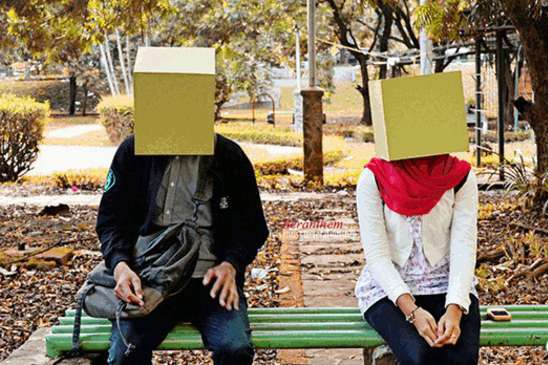 Reflections on the Marriage Contract

(SNN) - It started when he rented a billboard that said,  "I love you, Tracy". My name is not Tracy. He started to refer to me as his current wife though we had married right out of junior high school.

Returning from the office two days late, he explained traffic was particularly hellish that week. I felt so much compassion for him.

When he secretly joined an organization called "Parents without Partners who Pester" and attended an all male grieving support group at church, I was perplexed.

I asked if anything was bothering him.  He set fire to my dress. I felt powerless and hot.

How can truth hurt or help a relationship if one simply will not talk about it?

Recently, returning from my trip to the market, I found the locks were changed. so I broke the door and my nail to get in.

I found him napping with "an old army buddy" though he had never been in the armed forces himself but he is extremely patriotic. Then I noticed the guest towels had been changed to "him" and "him". How strange I thought, since I usually do the decorating.

I felt a tad uneasy.

I am pretty sensitive to wedded bliss and the downside of it as well.  I read Bride magazine and watch the show “Trading Louses.”  For those reasons and my volatile upbringing, I say with no modesty at all, I am an expert on the subject.

Obviously, every marriage has its challenges; my own parents threw darts and hot Irish coffee at one another most evenings but they have been married for 50 years; though not spoken for 26. Thank goodness for Postits© notes.

I simply decided to ride out this little bump in our relationship since he recently suggested we buy a duplex and play Downton Abbey.  He would be an aristocrat and I could live downstairs plucking pheasants, as he knows I love to cook while I would wait for him to ring my chimes. He really is a dear and sexually creative in spite of what my therapist says.

We had reviewed our marriage contract annually. One clause: I wouldn't bug him when he constantly watched TV football, the slo-mo of football, highlights of football and reruns of football while never moving from the couch even after I sold the couch.

He in turn, would allow me, in the winter season, to place my icy feet on his backside in bed. There was much more to that part of the agreement, which is much too private and perhaps illegal to reveal as I believe llamas are not supposed to be imported.

I was positive we had worked things out.

The ink dried and I returned to nagging him about his football obsession. He said he could not believe I was even mentioning it since we had just signed that legal document and yet, there I was still bugging him.

What my sweetie had not realized was that we still had two more days left on the old contract before the revisions.

Men are so naïve. What are you gonna do?

Photo by: Dimaz Fakhruddin flickr photostream, Some Rights Reserved, The Sage nor this article endorsed.