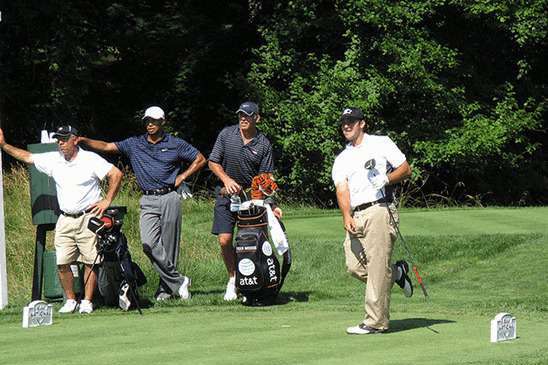 Rochester "This golf is no good I tell you."

(SNN) - The 2013 PGA championship is being held this week in Rochester, NY, home of Kodak, Xerox, the Garbage Plate, and once, Bausch and Lomb. This mega-spectacle is warmly welcomed by a few people in the area. Most of the others are concerned over the negative effect the championship will have on the economy, at-risk youth, and the physical and mental health of local residents.

The total purse for this year’s championship is $8 million. Local resident, Gil Cumberbun, reacted to that amount with great concern. “We ain’t got that kind of money to spend on a bunch of geezers whacking little balls into holes in the ground.” It was pointed out that the purse money was provided by corporate sponsors and not local residents. Mr. Cumberbun retorted, “Ain’t got no corporations around here either. Kodak has lost its image, Bausch and Lomb got bought out by some outfit outta Jersey and moved a bunch of jobs down there. Even I saw that coming. The only local corporation that seems to be doing well is Xerox, and no one is copying their success.”

Another resident, Violet Wilting, expressed concern for the youth of the area. As she sat on her front porch, sipping iced tea, and rocking in her chair, she said “All of these men coming in and out of town, spending lots of money, driving hard in fancy cars, it is going to tempt our youngsters into a life of sin. They will leave the area listening to the siren song of filthy lucre and leave the safety of home for a life on the road, as caddys, chasing balls and hanging out with clubs.”

Miguel DelGado also expressed concern. “This golf, is boring. It is nothing like fútbol of my beloved Argentina. This golf, all they do is say, ‘shhh’. Then they hit a little ball with a stick and everyone says, ‘ahhhh’. But no one runs, no one tries to block the little ball, no one gets knocked down. It is boring. The only excitement I see at this golf is when the little white ball hits someone and they fall down, ‘Ahhhhhhh.’” Miguel pretends to scream in pain and hops around like he is in pain to emphasize what he is saying.

Mr. DelGado continues, “Even today, I see more people falling down in boredom. They stand there, all quiet like the people with the big signs tell them. They start to sway and swerve. The next thing you know, they fall down. Bored. Like they are dead, bored to death. They (PGA officials) say it is from the heat, but I know better, it is boredom. This golf is no good I tell you.”

Despite these residents’ concerns, negotiations are underway to bring another PGA event to Rochester.

Photo: Some rights reserved by Keith Allison flickr photostream, "Tiger Woods and Tony Romo" - The Sage nor this article endorsed.