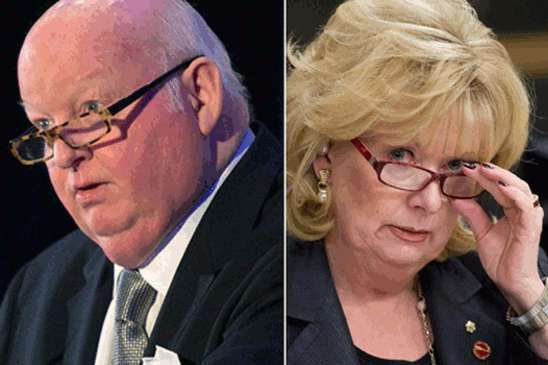 The Senate: Near-sighted, and memory-impaired.

(SNN) - Any week now, Parliament will reconvene and the Senatorial expenses row (Cheque-Gate?) will completely explode in the government’s face. I imagine Trudeau hasn’t been getting much sleep lately, lying in bed excitedly counting down the days like Justin Bieber looking forward to getting his monkey back – and probably spanked. He’s hoping that the savaging he’s going to give the PM at Question period will look like Shark Week II. Thomas Mulcair, likewise will be honing his one line questions to their razor-sharp, boring, lawyerly best. Both had better watch out, though. They could likely become the Chum of future Governments, just like Harper has.

While the Powers-that-be would like all of us to concentrate on the money involved, the dollars and cents don’t really matter in this case. Even though the amount of money that Pamela Wallin owes could have comfortably earned her seats on private jets to drop her directly at her Toronto address, the actual amount owed back to the Canadian tax payer wouldn’t keep Blackberry stock afloat for 24 hours. The problems in this case go way deeper, and prove once again that not only are politicians people that make Skip Tracers look like model citizens, it also shows how short a reporter’s memory is, and the bald-face misuse of the Upper Chamber by the party in power of the day – no matter who they are. You can tell that by the Conservative’s immediate response to this that ‘they only did it because the Liberals have been doing it for years.’ It sounds a lot like a multi-millionaire baseball player, doesn’t it?

The Senate is there to place a jaundiced, skeptical eye on the laws that the Commons passes to ensure that they are best for the Canadian people. A non-partisan job that allows party shenanigans doesn't actually become the way that we are all forced to live. Of all the Canadian Idol judges, they are the dudes in the leather jackets, not the pretty girl that likes the way that everyone dresses. How had we not known for years that the PM of the day would stack the Jury in his favour? They obviously should be invited in by a non-political body, and that would solve all problems. But, mere years after the current Prime Minister ran on a more accountable, transparent basis, how could he think that ‘stunt casting’ Senators like the producers of an Elizabeth Taylor biopic offering the lead to Lindsay Lohan, would be a good thing?

How could the Conservative faithful think that the appearance of a Conservative Senator at a fund-raiser, or on TV would add some credence to that situation? How could Senators Wallin and Duffy (among others) believe that they could actually get away with charging the Government for these appearances, and that a party that like to cut all hand-outs to the bone would pay up for these appearances with no receipts to prove it? Perhaps most incredulously, how could these ex-TV political reporters think that they could cheat the system like this and that a current crop of TV muckrakers wouldn’t get a sniff of it?

In the end, it doesn’t really matter who is there, because until we take the politics out of the political arena, we aren’t going to move forward on anything. How can we even do our best to address global climate change, if the current party in power is too busy just trying to get another four year salary out of their current decisions? Well, I suppose we could silence those that know, and fire them all, but that’s a different subject. Perhaps we should have a Senate full of scientists?

Steve James is an Actor, Stand up, and Comedy writer in Vancouver BC. He is available for Senate appointment…if anyone’s listening