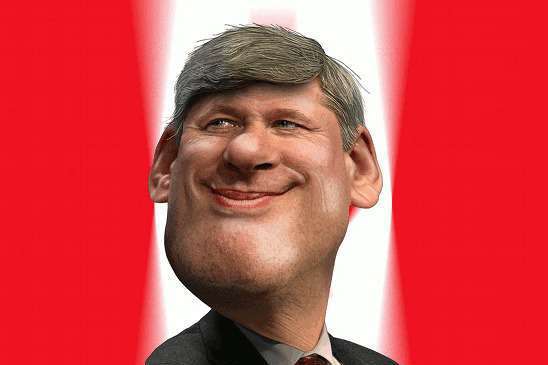 (SNN) - In a bold move, Prime Minister Stephen Harper has announced his plan to reform the controversial Official Languages Act by 2014.

Speaking to patrons of Henry Burger restaurant in Gatineau, Quebec on October 3, 2013, Harper spoke about the outdated OLA and the need to be more inclusive of our American neighbours.

"It's time to apporter the Official Languages Act into the twenty-first siècle, tsé?" said Harper in an artful display of Frenglish. "We must be able to "parler" with and provide services to not only Canadian official language minority communities, but also to "nos amis américains" who play such a vital role in our economie and télévision broadcasting industry."

Among the changes being contemplated is the loosening of the Active Offer requirement, which forces public servants to actively greet the public in English and French at all times, even when not talking to them. Currently, the only acceptable bilingual greeting is "Hello/Bonjour" or "Bonjour/Hello".

Under the proposed reform, public servants would now be permitted to select from a list of approved greetings, based on the person they are speaking to.

Former PM Jean Chrétien expressed his outrage at the proposed changes, stating that Harper had no proof that these would allow Canadian minorities to continue to receive services in the language of their choice.

When contacted by SNN to comment, the prime minister replied "Huh?"

Photo: Some Rights Reserved by DonkeyHotey flickr photostream, The Sage nor this article endorsed.