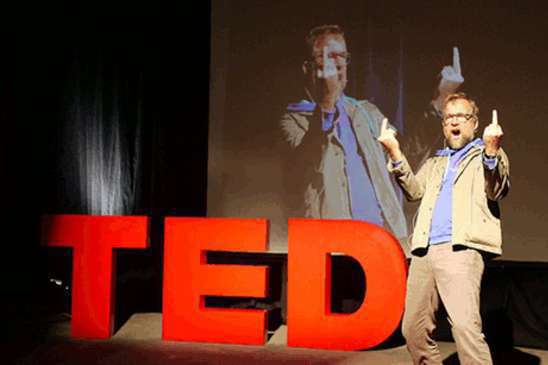 (SNN) - Since the first TED Talk in 1984 entitled "How to Program Your VCR," the conferences have become a worldwide phenomenon. TED has become the place for the intellectual elite to rub shoulders and celebrate advances in flying robots and flash mob democracy. In the past, these rarified gatherings have hosted such luminaries as Al Gore, Stephen Hawking, and Honey Boo Boo.

But all is not well with Ted, the founder of the conference that bears his name.

Citing a "general lack of new ideas," Ted has suspended all 2014 conferences.

Ted, who has never revealed his last name, revealed that he was considering crowd sourcing future talks in the hope that "someone out there has something better to talk about." Ted went on to say, "I don't want to hear another high-tech rant about how schools are killing creativity, why nomads need iPads, or how interpretive dance can save Afghanistan."

Ted expressed deep frustration over the predictable smugness and spirit of self actualization that has infected the conference. "We get a lot of YouTube clicks, but I suspect it's because people hate us."   Off the record, he revealed that he might ban all future presentations of hopelessly beautiful art, uplifting tales of triumph over adversity, Wii-mote tricks, and ironic humor that only graduate students can understand.

"If the situation doesn't improve, I'll have to change my name."

Photo: Some rights reserved by urban_data flickr photostream, The Sage nor this article endorsed.