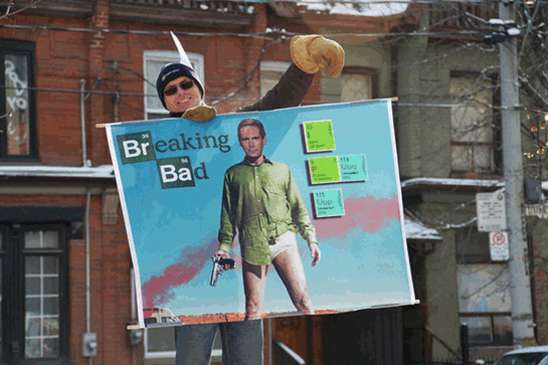 (SNN) - It seems the hubbub surrounding the finale of the eye-opening AMC series “Breaking Bad” is finally dying down. It's interesting to note that, despite what you may have heard, not everyone is pleased with the lifestyle and morals, or lack thereof, portrayed in the award-winning series.

Take for instance the twelve or twenty or six members, depending on whom you talk to, of the secretive faction known as Breakin’Good! Bearing colorful pseudonyms that would plant a smile on Snow White’s lips, the group of methamphetamine producers, or "cooks" are set to embark on a quest to erase the tarnish they believe was smeared on their image by Walter White and associates.

“We are not cold-blooded bastards,” proclaims Tweaker, the groups unofficial spokesman. “Not like Mr. White is. Was.” Tweaker’s sidekick, Sniffles, leans in and whispers in his ear.

“Yeah. We are not all cold-blooded bastards like Mr. White.” Tweaker leans my way and tells me in halitosis-tinged and hushed tones, “Whatever you do, stay far away from Spike. Dude is El-Oh-Kay-Oh, Loco!”

The ersatz labor union arranged our meeting in the shadow of a storage building on the edge of an industrial area on the outskirts of the Sonoran Desert near Tucson, Arizona.  Tweaker informs me, with a knowing nod, that there are “…anywheres from twelve to nine ‘gak’ labs in the general area” of the industrial complex. Sniffles points to the charred remains of a mobile home a few hundred yards into the desert. “Yep,” Tweaker says, a solemn tone creeping into his voice. “That was Stoner’s last ice stand.”

A third member of the group shuffles around the corner to join us, a young man they hail as “Wired”, dressed in black jeans, ratty running shoes and a dark green hoodie, despite the 98 degree shade. He ignores Tweaker’s introduction and my offered hand, but appears to station himself close enough to record our entire conversation, were he to be wearing a hidden microphone. I suspect the hoodie, like Tweaker's dreadlocks, has only been washed once this year.

“Wired is our secretary and IT department,” Tweaker tells me.

Wired is also integral to the group’s first objective in their offensive to win back the reputation of meth cooks everywhere. Once they get Wired’s laptop out of hock -- the hope is next week when they pool their income from Tweaker's latest cook -- they plan to initiate an online petition to have Breaking Bad’s creator, Vince Gilligan, YouTube a public apology and discuss the possibilities of a new series highlighting the good that meth cooks do for the world.

"Good? Such as?" I ask, pencil in hand, ready to write down a bullet list of items to be verified later.

“Well, see…we do a lot, um…well take Stoner,” Tweaker says, nodding at the trailer’s remains. “He was kinda like Jesse, you know, from the show. He was effed up and all, but he had a good heart. He gave this kid and his moms a lot of money and hung out with them whenever he could.”

Wired scoffs, a “pfffft” sound ejected from the shadow of the hood. “It was his own effin’ kid, moron. And the baby momma.” Wired shakes his head.

“Well yeah, but…he was a cook who paid child support! Not many of those around,” Tweaker declares righteously. “And besides, we do other good things. We, you know, add to the economic basis of the local economy base by buying…you know…stuff .”

“Pepsi,” Sniffles offers and I realize that he is a she, or at least has a soft, feminine voice.

“There you go," Tweaker says, and pumps his fist in the air. "Pepsi! And sugar donuts, and, and…Starburst.” He smiles and points to the left side of his mouth, the former residence of three or four teeth. "That's how I lost these: five pieces of Starburst orange. It was whack!"

Wired lights up a Marlboro, the smoke whipping around our heads in the hot breeze.

Sniffles whispers in Tweaker’s ear. “True that. Never, ever, never smoke while cooking. That’s Golden Rule Numero Uno of the Breakin’Good Cooks Credo: ‘Smoke while you cook and you’re smoked and cooked!’ Sniffles came up with that.” He drapes his arm over Sniffles’ shoulders. "Right after Stoner left us."

"Tell me, Tweaker, do you sample your product?"

“Hell yeah, beyotch! You gotta sample your product if you’re going to stand behind your product!”

I ask if, like Mr. White, they run their business as a business, record-keeping, inventory control, careful distribution.

“Hey, it's bout 80, maybe 75, good enough. You never turn it down, bitch.” Tweaker shakes out a cigarette and lights it. It’s his fifth since we arrived.

"The Breaking Bad series ran for six seasons. Why are you just now responding to the negative perception you claim the show created?"

“Ah man, we were stoked by the show, you know?" Sniffles nods and smiles, revealing a full set of teeth, albeit in various shades of gray.

"Exactly. Watching the story unfold, the father-son bond between Mr. White and Jesse. I mean, I held out hope to the end that Mr. White would do the right thing.”

"The right thing by his family? By his DEA agent brother-in-law? What should he have done?"

“Rescued Jesse from Uncle Jack, burned that barn-lab and all those Nazi-rats to the ground and started the business back up. Hey, we may be meth cooks, but we have hearts, too. You know?”

Sniffles points to a silver SUV approaching the industrial complex entrance. "No! Spike!"

"Clear out, man!" Tweaker stomps into the desert, tripping over his untied combat boot laces. Sniffles dashes behind the next building over, and Wired fades into the darker shadows and disappears like a whisp of black smoke.

I watch the SUV pass the parking lot entrance and continue down the road.

Photo: Some rights reserved by pbeens flickr photostream, The Sage nor this article endorsed.