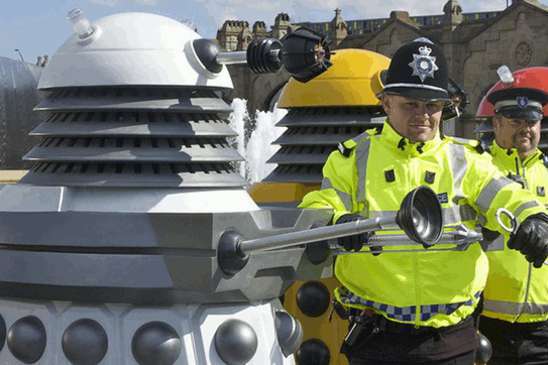 Michele Bachmann: "Doctor Who is Real."

(SNN) - Doctor Who is real. The beloved, regenerating sci-fi hero of over 150 BBC episodes has apparently revealed himself to Minnesota Congresswoman Michele Bachmann.

“I have traveled to the far reaches of space and time,” Bachmann announced, clarifying that she does not use public funds to do so. “I’ve been inside the Tardis. I have met Doctor Who.”

Aides close to the congresswoman acknowledge that she had nothing better to do during the US Government shutdown so she watched the BBC. After a marathon viewing session, Bachmann now insists that the show is a documentary. “Doctor Who uses the BBC to communicate with us.”

And Doctor Who has a message for humanity that he has now conveyed through Congresswoman Bachmann.

“He wants us to know that Daleks are the greatest threat we face besides Obamacare,” she said during an impromptu press conference outside a D.C. Burger King. “The imminent Cyberman invasion is more dangerous than the liberal media.”

Her claims of space travel are not corroborated by the stray cats and journalists who follow Bachmann closely, hoping for scraps and tidbits. “Of course no one noticed I was gone,” insisted the former candidate for president. “The Tardis travels at light speed. Duh!”

Claiming that the highest levels of the British Government are complicit in covering up the doctor’s existence, Bachmann has demanded that Downing Street come clean about the top secret Torchwood project. “England lost World War II. We can’t trust them to defend the earth.”

Critics were quick to point out that Bachmann has not been a past supporter of NASA or science in general.

Bachmann was quick to defend her sudden conversion. “I could stay silent. After all, The Rapture will have saved me before the alien invasion enslaves the rest of you sinners. But it is my duty as a  patriot to disclose what I now know to be true: the universe is in danger and unless Jesus shows up soon, Doctor Who is our best bet.”

Photo: Some rights reserved by mseckington flickr photostream, The Sage not the article endorsed.