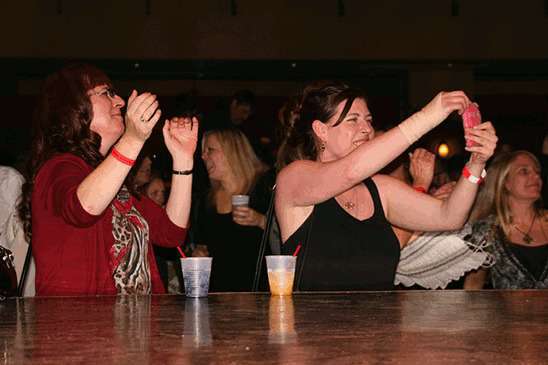 (SNN) - Saskatoon’s recently remodeled Bowling Pin House was rocked Friday night by the world premiere of a local band’s one and only song.

After 10 years of turmoil, personnel changes, and occasional practice (detailed in this recent SNN article), The SaskaToonSmiths, debuted their long awaited version of “Proud Mary.”

Mystery surrounded which version of Proud Mary the Toons would play swirled until well after the first note sounded.

“We really kept the audience guessing!” said bandleader and surviving member, Steve “Smitty” McSmith. “We eased into the Creedence version first, took a detour through Elvis-land, and then slammed balls to the wall like Ike and Tina on the third verse.”

Patrons hoisted pints of Moosehead to signal their approval when the room stopped ringing after the loud performance.

Was this version of Proud Mary worth waiting 10 years for? Was it worth the divorces, ambulance rides and stints in rehab?

“Absolutely,” said Smitty, savoring the crackling sound of a live mic lying in a puddle of spilled beer.

Triumph aside, the evening did have a brief down side.  Fed up with his secretive devotion to music, Smitty’s girlfriend, Blinka, recently left him for another band’s rhythm guitarist. A shouting match broke out when Smitty spotted her in the lounge and accused her of spying for The Sheepdogs, his crosstown rivals. Aside from a few projectiles and harsh words that can never be unsaid, the bartender reported fewer brawls than usual for a Friday night. He was, however, quick to acknowledge that the reduced injury rate was probably because the band was onstage instead of at the bar.

What’s next for the band? After replacing a backup singer who tripped over a wah-wah pedal and fell into a bowl of chili-cheese fries, the band may also embark on a Proud Mary tour of local fraternity parties. Speaking off-the-record, a band member also hinted at a possible sponsorship from Saskatoon’s leading chain of Laundromats.

As for the play list, “Smoke on the Water” or “Total Eclipse of the Heart”, are rumored to be top contenders for the band’s next project. “It took us 10 years to learn Proud Mary, but we’re definitely accelerating as a band. At this rate, we’ll have a killer set by 2025.”

Photo: Some rights reserved by Stephen Dyrgas flickr photostream, The Sage nor this article endorsed.