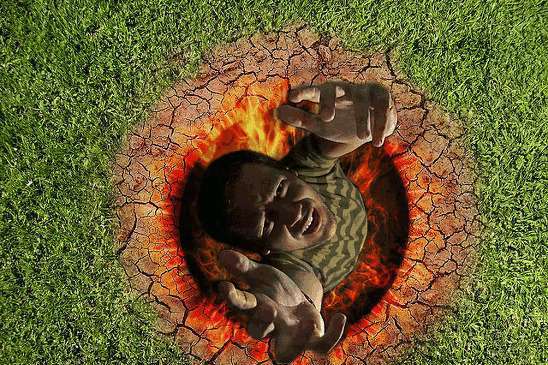 (SNN) - I have always been wrong; I’m male, a first born Son, English, an employee, a writer, and married, so I’ve had a lot of practice. In fact, I’ve gotten so used to it, every time an idea passes through my mind, I warn myself that I’m wrong before I say anything: So, Ok, I’m wrong, but did any of the veterans of foreign wars that more and more of us are forgetting every year (You can tell by the amount of Poppies being worn.), see the kind of world that they freed up for us? I mean, I may be wrong, but how come we have become accustomed to a world where:

An American Football player who is the size of three stacked Smart Cars quits the game because he is being bullied to the point that he can no longer earn his multi-million salary. Now it appears that not only did the team know about it, they may have started the bully on his path. By the way, these people wear helmets and pads for a living.

A Mayor of one of North America’s largest cities has admitted illegal narcotic use while making decisions in office, and used alcohol abuse as an excuse. He has been seen by Millions threatening someone with physical violence, and is twice the size of a pro. Football player (bullied). The discussion now on the table is if he should step down and go to rehab. Isn’t the answer ‘yes’ more obvious than a pair of ‘normal’ thighs in a pair of Lululemons?

A programmer that has found a good way to keep track of a cheating spouse’s online and phone conversations is named as one of the Globe’s top criminals – by a government that has just been found guilty of doing exactly the same thing to every Head of State worthy of a UN seat, plus Royalty, heads of global churches, and all of its citizens. Hello…kettle? Meet pot.

In a Western society when we have all grown up with the patently obvious statement that everyone is worth the same pay-packet regardless of gender, and the outlandish fight that has gone with that statement for the last fifty years, Pop Culture (it’s childish, remember?) still maintains that to be a ‘Diva’, and to be a heroine to teenage girls, you have to dress like a mentally deranged nymphomaniac, and act like a graduate from the Madonna school of sluttishness. It is freedom, apparently. Meanwhile rape and abuse figures go up, as more and more girls dress and act like their idols. There is a connection here that is closer than Canadian Government scientists and unemployment.

A national Government that ran, and was elected, on a platform of helping all citizens turns a blind eye to a foreign Government entering their country through a corporate entity, and employing their own workers because they cost less and don’t add to the profit and loss of their host country. This immediately inhibits not only Canada’s workers, but Trade Union deals, and places their own citizens on state-sponsored unemployment instead of adding to the Country’s good on multiple levels. These, by the way are the same people that demanded that unelected Senators ‘repay the favour’ of being placed into their position by talking up the Government during various TV events, didn’t reimburse them for their expenses, then allowed them to be fired without defence, leaving them more naked and alone than the Philippines during a typhoon.

A social media company is floated at a value of over $30 Billion, while it has never turned a profit, and it’s only avenue of making profit has been proved by its predecessors to be the one thing that makes its followers leave in droves, and for it to enjoy popularity that is marginally less than an Arabian dictator’s.

I could go on. We all could. This planet has been heading downstairs to the guy with the horns ever since I can remember with the speed of a burning Tesla. Of course, My Parents thought this when the Beatles came out, and their parents probably tut-tutted at the rise of the Glenn Miller Orchestra, but they weren’t living in a world where Sport is big business, political optics mean nothing, singing heroines are pimping out their audience, corporate planning only means promise, not track record, and countries are farmed out to others for what is under their soil. Or am I wrong?

Steve James is an Actor, Stand up, and Comedy writer in Vancouver BC. He doesn’t think he has been bugged by the NSA, but he may have been bullied by them.

Photo: Some rights reserved by NeoGaboX flickr photostream, The Sage nor this article endorsed.