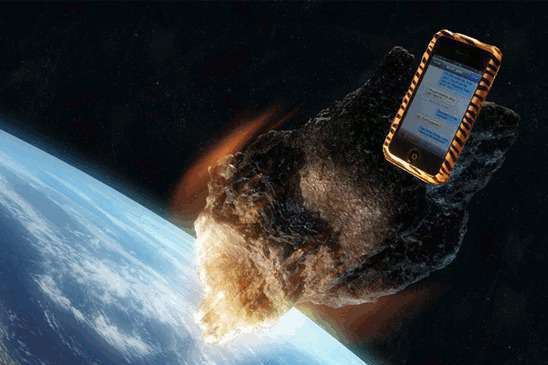 Distracted Half-ton Meteorite that Crashed into Earth was Texting, Tweeting

Photo: Before crashing, Meteor texted "After party, Bev barfed all nite. LOL what a skank"

(SNN) - Fragments of the huge space rock that burned through the skies over the southern Urals in February probably crashed to Earth due to a misuse of social media.

Russian divers recovered a giant piece of the Chelyabinsk meteor from Chebarkul Lake in Central Russia.  Retrieval took months longer than expected because the area is remote and scientists couldn’t pronounce its name when asking directions.

Geologists who examined the 1,256-pound fragment said that the meteor didn’t intend to hit the Earth, but probably wasn’t watching where it was going.

“I mean, look at the size of this place,” said NASA Meteorite Researcher Rocky “Ace” Butane, spreading his arms wide to take in the entire horizon.  “How do you not see something as big as a planet?  An actual planet!

“Clearly, a certain meteor was texting a friend instead of paying attention to the Solar System.”

Further evidence that the meteor crashed while texting came when investigators at the impact site recovered remnants of a mobile phone the size of Bakersfield, California.

Chelyabinsk is the largest recorded strike since the 1908 crash in Siberia of the Tunguska meteor.

“But that one was drunk,” said Butane.

The Chelyabinsk strike generated a shock wave equivalent to 20 Hiroshima atomic bombs. While amazingly no one was killed, the International Astronomical Society has recommended the implementation of a variety of planetary protections that include: