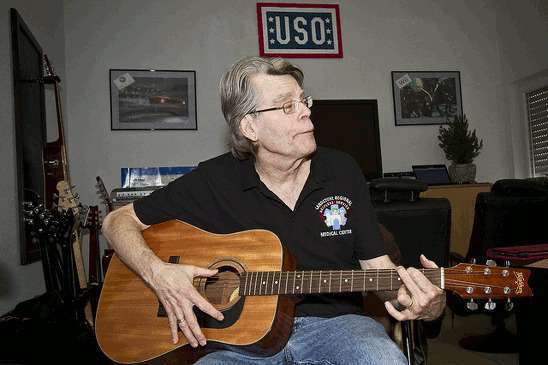 An Interview with Stephen King

(SNN) - The original plan was to interview Stephen King, but to my disappointment he declined. However, I was able to swing an interview with his bandmate and fellow author, Dave Barry.

L: Thanks for agreeing to this interview, Dave. I’m a big fan of your humour and love your writing on bad songs. I understand you play in a rock band, and that Stephen King is in it too?

Dave (chuckling): What we lack in talent we make up for in loudness. We call ourselves the “Rock Bottom Remainders.”

L: How did you come up with the name?

Dave: You can’t be in the band unless you’re an author, and a remainder is a book that can’t be sold, even at rock bottom price. We expected our covers would go over the same way.

L: Stephen King is a good guitarist then?

Dave: We have a lot of fun playing together, and we donate our profits to promote literacy. But the money for charity is really beside the point. As one band member said, and I won’t mention Amy who, “I would do this even if it killed the whales.” We have a core group of five with the others showing up as their schedules permit. And for some reason people keep coming to hear us play.

L: I read you received a Nobel Prize for Social Commentary. What issues do you speak out against?

Dave: Actually, it was a Pulitzer Prize. I don’t know why I was given that award as I’m really not that much of a deep thinker. I did once write a column suggesting that all accordions should be thrown into a pond somewhere. And I’ve taken a firm stand against low flow toilets.

L: I’ve heard those are the shits. Is Stephen King also against low flow toilets?

Dave: Yeah, I’m sure he is. Shit is a scary thing for most of us. I have two daughters, and I can honestly say that from the day they were born their poop has scared the crap out of me.

L: So, let me get this straight Dave, you’re saying that Stephen King is afraid of shit?

Dave: Most people don’t know this, but Steve King is afraid of a lot of things. And he knows these same things scare the hell out of most people – and those are exactly the things he writes about. Steve should write a book someday about an epidemic of especially terrifying shit. And he’d be the first to say his books are shit. (laughing) That’s the kind of guy he is.

L: I read you’ve said you left college without having any marketable skills. What was your first job out of college?

Dave: For a while I wrote for “The Daily Local News.” It sounds too stupid a name to be real, but that was the name of the Westchester, PA paper I wrote for. One day we ran a story with the heading: “Woman Beats Off Would-be Rapist.” By the time we realized our goof the paper was out and it was too late. Soon after that I was assigned to cover the meetings of a nearby Sewage and Water Authority. There was a lot of talk about sewer interceptors at these meetings and the discussion would go round and round this topic like water circling in a toilet bowl. I still don’t know what sewer interceptors are. Why would anyone want to intercept sewage?

L: I can’t imagine. Dave, the holiday season is right around the corner, and I’ve read that for quite a few years you’ve run a Holiday Gift List in the “Miami Herald”. What is the most memorable item you’ve put on your list?

Dave: Naturally, the Holiday Gift List is not a serious list. We look for genuinely stupid things to photo for the piece. I remember one year we ordered a bunch of duck butts – these were decoys with only the butt of the duck sticking up. The idea behind them was that with traditional duck decoys, birds flying over were becoming suspicious because none of the ducks appeared to be feeding.

L: And you put these duck butts on your Holiday Gift List?

Dave: Yeah, we got the idea to put 3 or 4 duck butts in a punch bowl and we ran a photo of this as a suggestion for holiday entertaining. As we found out later, the company had recently stopped manufacturing the duck butts, for a very good reason. But they got so many orders after we put them on our Holiday Gift List that they restarted production. This time, though, the company included a warning that if used in a punch bowl the alcohol might act as a solvent and dissolve the plastic.

L: Weren’t you concerned that someone might miss the warning and you’d be sued?

Dave: No, my feeling is that anyone who’d drink punch with duck decoys in it deserves what they get.

L: You’ve been great, Dave. Is there any chance you’d try to convince Stephen King to give me an interview?

Dave (with a WTF expression): Could you run that by me again?

L: Never mind. Thanks for your time and Merry Christmas, Dave.

Photo: Some rights reserved by The USO flickr photostream, The Sage nor this article endorsed.
Note: No writers or musicians were interviewed for this peice.