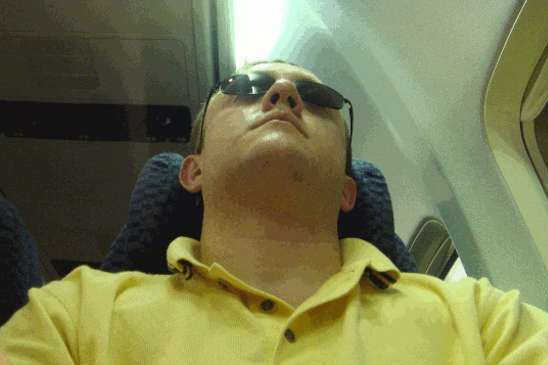 Airline Says "Oops, My Bad" After Man Flying to New York Wakes up in Thailand

(SNN) - A Texas businessman who fell asleep on a flight from Houston to New York was shocked when he woke to find himself at Bangkok's Suvarnabhumi Airport, thirty-four hours later.

Bramblesnort Crippledorf was travelling on United Airlines' partner air carrier, BigJetElite, last Friday when he fell asleep in his window seat at the back of the plane. He didn't wake up when the aircraft landed at LaGuardia International Airport, but instead continued to sleep through the aircraft's refuelling and three subsequent flights to Houston, Tokyo and finally Bangkok.

"I woke up when the plane landed on the tarmac and I thought things looked a bit different," said Crippledorf, who was apparently still groggy when he disembarked with the other passengers. "I was like, 'This doesn't look like New York'. I thought maybe it was a layover or something."

In a statement issued to the press yesterday, the airline said "Oops".

Company spokesperson Dude McFadden confirmed that the air carrier is still investigating the incident to determine how personnel sweeping the aircraft in New York, Houston and Tokyo somehow missed the 200 lb man with big feet stretched out in window seat 23A. "It's believed that flight attendants and aircraft groomers didn't see him due to the fact that the man's black suit and orange tie blended in so well with the seat," he said.

According to McFadden, United is looking to update its Standard Operating Procedures (SOPs) to require flight attendants to poke all seats with a fork before leaving an aircraft. A new procedure is also being developed to instruct attendants on how to wake comatose passengers when discovered. "I'm not sure what drugs this guy was taking but I gotta get me some of those," he quipped.

In the meantime, United has publicly apologized to Crippledorf, offering him vouchers for free Twinkies and a return trip to the U.S. via the USS New York, a military transport ship. "The bunks are a bit lumpy but at least he'll be sure to wake up when the ship docks in New York," said McFadden. "But that might take a few months."

Crippledorf's baggage is currently being held for him at LaGuardia, marking the first time in history that a passenger's belongings arrived at their intended destination while the owner shows up on the other side of the world.

Photo: Some rights reserved by MrVJTod flickr photostream, The Sage not this article endorsed.