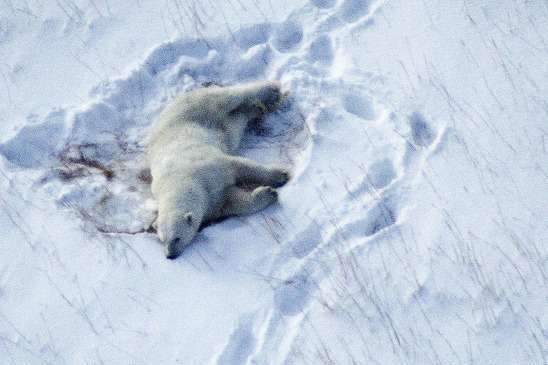 (SNN) - A team of scientists in Grise Fiord, Nunavut reported that polar bear flatulence is the cause of alarmingly high concentrations of methane in the Arctic Circle.

The unexpected finding was made by researchers from the Polar Atmospheric Surveys of Greenhouse Activating Solutions (PASSGAS), who confirmed that the levels of methane in the Arctic air exceeded 1,000 teragrams per year, enough to kill a herd of horses. Methane (CH4) is a greenhouse gas that is over twenty times more potent than CO2.

While the presence of methane in the Arctic Circle is not new for scientists, the source of the gas definitely is. Camel Bramblewink, the PASSGAS scientist who led the expedition to Grise Fiord, said he had no idea he'd be making such a remarkable discovery when he set out to sniff toxic gases in the great white North.

"Previous studies have consistently indicated that methane is contained inside the soil and seabed and is only released when the permafrost starts thawing," snorted Bramblewink, his right nostril still sealed shut from the exposure. "However, this theory didn't seem to hold up given that the temperature was well below -40 degrees."

According to Bramblewink, the gas was "nauseatingly prevalent" in the cold air, almost asphyxiating the team before they even set up camp.

"The concentrations seemed to increase as we approached a population of polar bears sitting on an iceberg," he said. "When we saw smoke coming out of a bear's butt and the iceberg melted, we knew we had found the source."

To prove their theory, the scientists donned gas masks and set out to gather the requisite evidence for their research paper. Experiments included feeding the bears broccoli, cheese and bean chili and analyzing the change in methane levels at various distances from the bears' grumbling behinds.

"While polar bears don't eat bean chili as part of their diet, they do eat seals, which is similar in fat content and digestibility," said Bramblewink.

After collecting the data and completing the study, researchers were airlifted to Qikiqtani General Hospital in Iqaluit for oxygen treatment. As for the study results, data showed that the number of times bears cut the cheese increased in direct proportion to the amount of food ingested. Methane levels were shown to increase by an average of 10%, and reached a high of 35% in the two hours following the consumption of a particularly spicy bean chili.

Environmental organizations immediately reacted to the report, stating that the gas is activating and intensifying ozone depletion. In an uncharacteristically swift response, the federal government committed to inject $15 million Canadian taxpayer dollars into the creation of dietary and fitness programs for seals, the polar bear's main food source, to make them "leaner, fitter and easier to digest."

“It's time to put those suckers on a diet," said Health Minister Rona Ambrose. "It's not healthy to have that much blubber. Plus they're making our bears fart, which is bad. Very bad. And smelly."

As part of the federal government's commitment, Prime Minister Harper also met with U.S. President Barack Obama to propose the implementation of a similar initiative for seals and penguins in the Antarctic.

Photo: Some rights reserved by NWFblogs flickr photostream, The Sage nor this article endorsed. Original image can be found here.