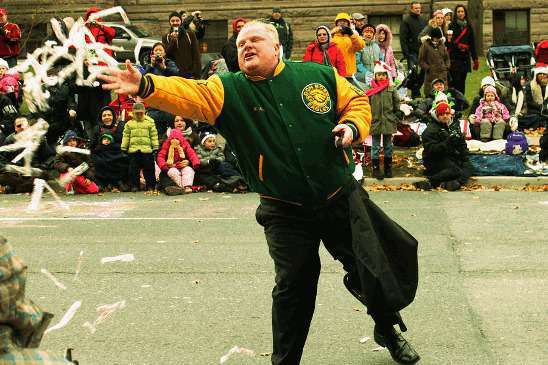 Rob Ford, Prepare Yourself for the Red Planet

... and Mars, Prepare Yourself for Rob Ford.

(SNN) - We have had our share of not-so-honest politicians, but Rob Ford has trumped them all. For over a year, Ford has monopolized the world news with his outrageous, obscene, and humiliating behavior.

I must admit, at first I watched with a mixture of horror and curiosity; a Mayor smoking crack?! It seemed inconceivable. Yet as the story unfolded it revealed a man of epic proportions in his ability to:

Rob Ford's list of deplorable antics is long, repulsive, and, well, getting old. Lets reiterate no more. I believe I have come up with a solution.

In an unprecedented move, I contend that we draw up an eviction notice for Mr. Ford. From Earth. We would not be so inhumane as to blast his bulk into space with no place to go, no, he will have a seat on the one-way trip to Mars on the Mars Mission One, the goal of which is to establish human settlement on the Red Planet.

Any new colony requires leadership, and Mr. Ford could run for Mayor on Mars. Mayoring an entire planet would feed Ford's narcissistic personality and grandiose self image. At the same time, Canada rids itself of 350 pounds of embarassment.

It's ideal, even being the answer to Ford's weight issue. With 63% less gravity on Mars, the Mayor will weigh in at approximately the slim, trim weight of 133 pounds.

In the interest of Rob Ford's health, it will be like going to rehab and never getting out. On Mars there will be no cocaine, marijuana, heroin or other illicit drugs. There will be no booze, thus preventing Ford from sitting around in Mars bars getting himself into one of his drunken stupors as he so eloquently phrases it.

The time it takes to travel from Earth to Mars is between 150 and 300 days, which is good, as it would give Mr. Ford time to think about what he's done, hopefully giving him insight into how to be a better Mayor as a Martian.

Photo: Some rights reserved by Jason Verwey flickr photostream, The Sage nor this article endorsed, The original image can be found here.