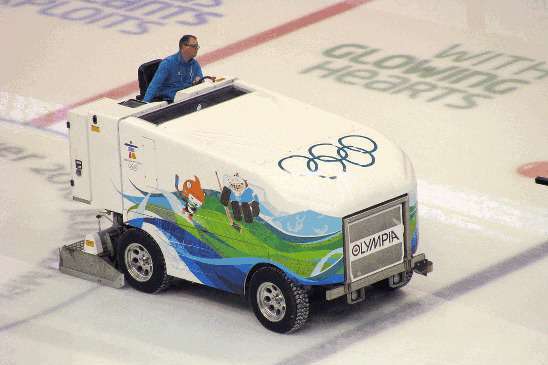 (SNN) - Allegations of collusion among figure skating judges in Sochi resurfaced on Monday after a zamboni driver walked away with the gold medal in the men's short program.

Barnabiev KIirshajondokov, a 65-year-old Russian with severe arthritis, became the first man to win an Olympic gold medal for figure skating while wearing Nike running shoes. Klirrishanadokov, who rode his zamboni across the ice at least twice, locked down the top podium spot with a whopping 98.72 points, beating out former Olympic Champion Yevgeni Plushenko and American hopeful Jason Brown in what was called "a very tough competition". Plushenko finished in second place with 86.72 points while Brown's 82.22 points led him to the bronze.

Not surprisingly, Kazharkodov's win resulted in an uproar in the Olympic village within minutes of the announcement, prompting the International Olympic Committee (IOC) to launch an investigation into allegations of collusion among the judges.

"There is currently no hard proof that the competition was fixed or that the judges were dumb," said IOC spokeswoman Emma Dopplegurk, "but we have asked figure skating officials to investigate a number of questions and apparent discrepancies in the way points were awarded by the judges." The investigation will also focus on how to write and pronounce Klarijohonodokopf's name.

"I do not undairstand why ze IOC inseests on dees intairview," said French judge Marie-France Lorgogne in a statement to the press, on condition of anonymity. "Eye gave points based on -- how you say -- stile and exécution. The zambonee drivair gave an élégante and wonderfoule pairformance and deserves to bee recognized for eet."

Her comments were echoed by the German judge, Ernst Stellwagen, who argued that Kladashridkov's routine was simply stunning. "Heez sit spin was fabulous and his transitions vere smooth. He also had great height alsough he did vobble a little on zee landing from ze zamboni. But he vas off ze ice at sat time so it didn't count."

Despite the commotion, Kazhardinnov was thrilled with the award. In an interview with Russian-based newspaper Poutine News, he exclaimed, "I can't believe eet! I'm so happy! Had I known I was being judged, I would 'ave worn my red pants. Does my backside look beeg in theez pants? Dis medal is heavy. Hi Mom!"

Results of the IOC investigation are expected within a few weeks.

Photo: Some rights reserved by Beach650 flickr photosteam, The Sage nor this article endorsed. Original image can be found here.