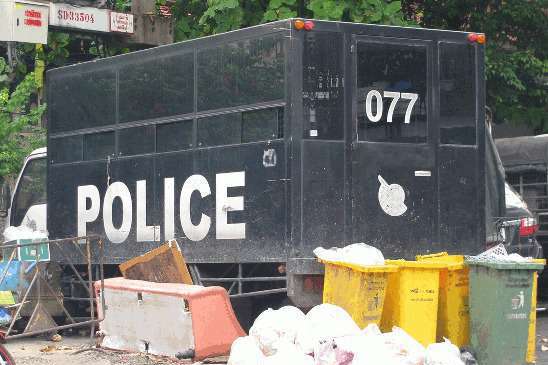 Arrest Him for Illicit Lighting and Garbage Stuffin

(SNN) - Eighteen Vancouver Police Department (VPD) patrol cars descended on David Suzuki’s house in the Kitsilano neighbourhood of British Columbia’s largest city on Monday, after an informant tipped them off about a possible case of unsustainable living practices. Vancouver is not the capital of B.C.

Suzuki and two acquaintances who remain to be identified were arrested and taken to the local police station in mid-afternoon, where they were officially charged with loose environmental morals, said Det. Sgt. Camelcrack Bramblebutt who is heading the ongoing investigation into Suzuki’s illicit lighting and waste disposal activities. Suzuki was also charged with one additional account of not practicing what he preaches.

“A search warrant was executed for Suzuki’s other residences in Kitsilano, Quadra Island and Nelson Island,” said Bramblebutt. “We fully expect to find more evidence in support of this case.”

When questioned about the large police contingent that arrived at the activist's home on Monday, Bramblebutt confirmed that nearly two dozen detectives were present to enact the search warrant.

"In these types of situations, we don't know what we will face ... who knows what type of non-environmentally friendly practices or products we may find. It's always good to err on the side of safety."

As for Suzuki himself, bail was initially set at $20,000 but was subsequently increased to $100,000 after he ripped a telephone out of the wall in the interrogation room. It was believed that he was speaking to Sun News reporter Ezra Levant at the time. He was released at approximately 10 pm Monday evening after promising to appear in court.

Photo: Some rights reserved by David Darricau flickr photostream, The Sage nor this article endorsed. The original image can be found here.