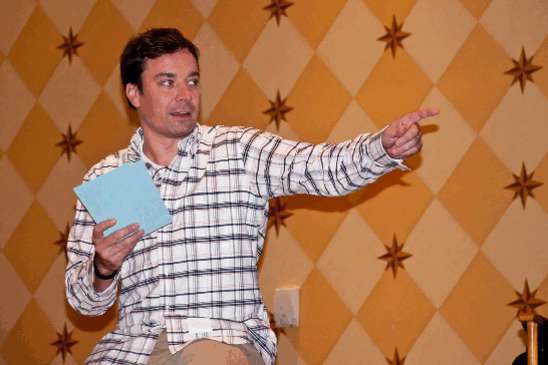 (SNN) - I’m a big David Letterman fan, but I’ve just seen a young upstart blow the doors off the late night talk show race. If Dave’s not worried, he’s either not paying attention or decided to take early retirement.

I think he’s paying attention. The fact it’s taking place at his old unrequited love’s address, The Tonight Show, has to be particularly galling.

You couldn’t design a better talk show host than Jimmy Fallon if you built one from scratch. He’s handsome, but not intimidatingly so, enthusiastic, likeable,  a fearless entertainer willing to risk looking foolish. (Duet with Springsteen? Come on!) and has a gift for spoken and musical mimicry. Any interviewing weaknesses are downplayed by bits added to the mix. Bradley Cooper was good for one segment, but rather than losing inertia, his second segment was a game of Charades.  That kind of imagination may be hard to keep up.

Fallon also has sincerity, or at least the ability to fake it convincingly. He has the support of the power behind the throne at NBC (Lorne Michaels), five years experience in the Talk Show minors, and the ability to land A-List guests and attract top writers.

There’s more. His house band, “The Roots” are not only immensely talented and versatile musically, but have several members who are adept at sketch comedy. Plus Fallon is already entrenched on the internet, going viral more than most people go out for coffee.

His opening three shows left Dave looking like an old hooker turning tricks in the dark, or a crafty veteran pitcher painting the corners because he can’t bring the heat.

To compete with a man young enough to be his son, Dave may need infusions of Red Bull.  He hasn’t gotten off his assets and out on the streets, or bounced off a Velcro wall in years.  Stump the Band? Gone. Selling Big Macs at Mickey D’s? No more. Location shoots? Nope. He sends surrogates like stagehand Biff Henderson, comedian Andy Kindler and the talented “Intern Todd” who covered the Super Bowl.

Why has he turned slacker? The Young Turk who has become a Social Security recipient who’s had open heart surgery. He’s taken on a second, even more energy sapping job—helping raise a son.

Meanwhile, Fallon is shamelessly stealing Dave’s lunch by doing familiar bits. He parked a band (U2) on the roof for a number. Dave and Jimmy Kimmel have gone musically al fresco for years.

Fallon even tried some Monolingus interruptus, a bit straight from the Letterman playbook. But you can’t copyright a concept and most of Dave’s stuff was borrowed from Steve Allen anyway. No secret, Dave cheerfully admitted his larceny to a frequent guest—Steverino himself.

Another thing playing in his favor: Fallon’s apparent lack of neuroses stops him from sabotaging his own material, something Letterman has done with some frequency over the years.

As this is a review, it needs some what-could-go-wrong cautions.

Of course, it’s too soon to make an informed call on Fallon long term. But after three shows the only thing I see stopping him is a wayward cabbie, incurable flatulence, or sheer exhaustion. He’s a happy workaholic who thrived on the take-no-prisoners chaos of SNL. But he should lose or limit his “I really love that guy (you guys)” before it becomes a fraternity drinking game

I won't abandon The Late Show, I’ll DVR and watch both. Can’t give up those occasional moments of genius Dave provides. Or his wonderfully cynical onstage presence that tells you, he’s in on the Big Cosmic Joke that is Show Business. Odd man out—for me anyway—is Kimmel, who’s very good too. If Ellen DeGeneres stumbles hosting the Academy Awards—or even if she doesn’t—you can bank on ABC booking Kimmel to host next year to raise his profile.

But until the sad day Dave hangs up his Lavaliere for good, it looks like late night talk shows are entering a new golden era.

Photo:  Some rights reserved by nickmickolas flickr photostream, The Sage nor this article endored. Original image can be found here.