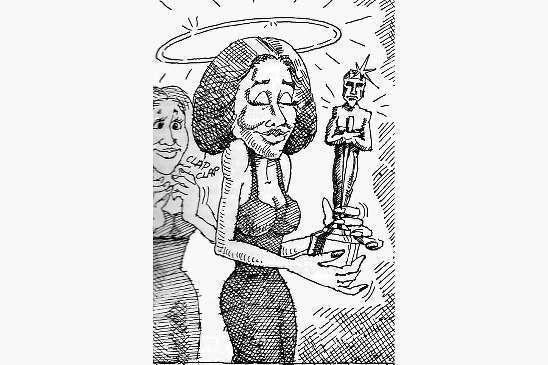 Image: Best Performance in the Field of Nagging.

(SNN) - Why they have to be so secretive is beyond me. I just received my clandestine pre-Oscar show Gold Trophy as best in the Field of Nagging award yet again. When Joan asked me (passed in a post it note) who I was wearing I told her to goshuthefrontdoor, as I remember how cheap she was when I sold her a bunch of monologues in the late ‘70’s. In spite of her glowing words to me, and her actually being one of the funniest women on earth, she is so very mean spirited. Humor should connect and not be so hurtful with every joke. She doesn’t need to do that. STOP IT JOAN! STOP IT THIS MINUTE!!!

Just by mentioning her name, even though she probably is the Queen of comedy, makes me want to wash my mouth out with Tequila. Some times just thinking of the letter J as well as other letters of the alphabet make me want to do that. Hmm.

I missed being the winner only that one-year when I had listened to all those new age suggestions to let everyone be and do their own thang!

Of course there were the months I wasn’t born yet, but mother said every time she took a shot of cheap whiskey I gave her belly (from the inside) a big kick.

I’d like to believe I was born to the cloth as other revered *philosophers were.

Well, you should know, my life fell apart that nag-less year. I didn't tell anyone what to do or give advice so every unuttered word went straight to my hips and I celebrated “Fat Tuesday” every day of the week.

The kids didn't clean their room that year so our home was condemned by the Board of Health.

One son refused to get a haircut while I said nothing and the principal legally changed my boy’s name to Mary Elizabeth (which he chose to keep) so years later when he was drafted into the Army it caused lots of consternation. Oh please, don't ask. It was a long time ago.

So, listen to me; wash your hands, sit up straight and it wouldn't hurt to take a nag to lunch once in a while!

Just stop scowling as if Nagging is a bad thing. Remember, Plato* was Nag,  too! (C.)

As a matter of fact, Plato and the Platitudes were the first rock/advice/ giving group in history. By the way, do not forget Confucius* as well, though he was king of the double entendre. Remember when he said if you went to bed with this at night, you would wake up with that the next day? The man had a filthy mouth. Did he ever mention that if you ate Mushi pork you could bloat the next day?  I would have told you. In essence, I am your modern day philosopher.  So…would it be such a big deal to tweet me sometime?

Nagging is simply informing, my friends. Therefore, just think of me as your personal information booth, or kiosk if you prefer.

And do remember, this: maybe you want to write this down, well at least post it on a bulletin board you silly goose as you seem so forgetful lately, I only tell you for your own good. The commission I receive as president of the National Association of Gripers has nothing to do with it.

Image: Copyright Jan Marshall, All Rights Reserved, Use with Permission