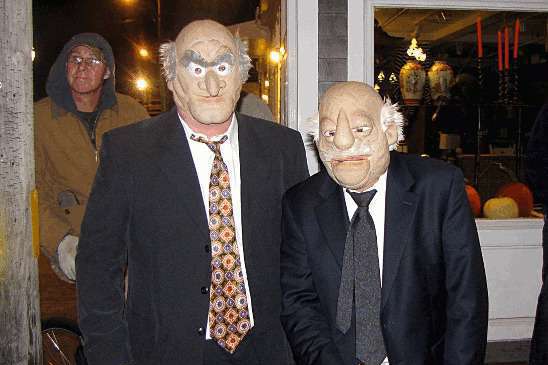 Cowell and Ramsay Sign On to Become Muppet Hecklers

(SNN) - Fans of the Muppet Show could barely contain their excitement on Monday after producers announced that Simon Cowell and Gordon Ramsay had signed on to replace Muppet TV's most infamous hecklers, Statler and Waldorf, next season.

The news came after the two grumpy pug-faced characters (Statler and Waldorf, not Cowell and Ramsay) announced their intention to retire after 40 years in the heckling business. The pair will be giving up their seats in the stage left balcony box to the stars of X Factor and Hell's Kitchen, who will clearly have small muppet shoes to fill.

Despite some initial uncertainty at the idea of replacing two toothless muppets with two brainless old guys, producers were very pleased with their choices, stating that the decision to hire Cowell and Ramsay was an easy one.

"We needed two nasty, obnoxious bastards to hurl insults at performers on stage. It was a no-brainer, really," said the show's director, Sonny Dinklecrumb.

When asked what he thought of working alongside Kermit, Fozzie and Miss Piggy, Cowell indicated that he was thrilled to have the opportunity to bitch at puppets. "I've berated men, women, children, even gospel singers so this is a new challenge. Let's see if I can make a muppet cry."

Ramsay, on the other hand, said he intended to stay far away from Miss Piggy for fear that she would whoop his ass if he criticized her bacon.

As for Statler and Waldorf, they expressed enthusiasm about the new hosts in their typical, straightforward way:

Photo:  Some rights reserved by ka1kjz flickr photostream, The Sage nor this article endorsed. The original image can be found here.