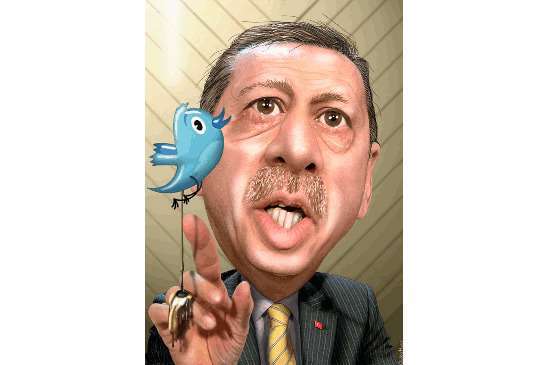 (SNN) - After months of trying to eliminate social media giants like YouTube,Twitter and the Arkansas Gazette from his country, Turkish Prime Minister, Recep Tayyip Erdogan, has now resorted to more extreme tactics. With both he and his son facing allegations of corruption and temper tantrums, Mr Erdogan's latest attempt to stem the slurs involves the prohibition of all information communicated by audible or written means.

The new law will even bar geneticists from manipulating DNA for fear the sequences might be used to construct secret messages out of the constituent bases of A, G, C and T. A spokeswoman for the Ministry of Science justified the blanket ban by pointing out that (a) it was possible to spell out the name of the science fiction movie, "G-A-T-T-A-C-A" and (b) the Prime Minister didn't like blankets.

While the new legislation is likely to be challenged in the courts at some point, experts are analysing the precise wording of what is being dubbed (or in some cases, subtitled) the Anti-Communication Act to establish what it might mean for ordinary citizens. Dr Ebecen Tarkan, a lecturer in Gossip Studies at the University of Antalya, took the opportunity to speak to Sage News before the ban. "The drafting has been expertly done but there is room for manoeuvre," he said. "There will be some for whom this law changes little. I am thinking of those people who rely on sign language or regularly converse using flags. However, I still fear that many of us will have to suffer in silence."

Nevertheless, it would seem that a sizeable proportion of the country's population has already identified at least some of the loopholes. Ankara's prestigious School of Semaphore has seen admissions for its courses increase tenfold over recent days. Pharmacies have also started to stock luminescent chapsticks to aid lip reading in low light and sales of 'Telepathy for Dummies', the latest in a line of successful self-help books, have completely eclipsed its predecessor, 'Intelligent Ketchup for Dummies' (or so my sauce tells me).

One challenge will be whether Turkish websites and television channels can adapt quickly to incorporate these unconventional forms of communication. Sadly most radio stations face imminent closure, although Tinnitus FM is an exception to the rule and says it will continue an uninterrupted service to listeners whether they want it or not.

Government officials admit that Mr Erdogan faces ridicule and isolation from the international community. However, they are confident he will maintain his control over a dubious Turkey by using his glow-in-the-dark lips and the power of his mind. On a positive note, its never been a better time to be an illiterate deaf mute with an F in genetics and a severe phobia of flags.

Image: Some Right Reserved by DonkeyHotey flickr photostream, The Sage nor this article endorsed. The original image can be found here.

DISCLAIMER: The above article is provided for entertainment purposes only and the article, image or photograph held out as news is a parody or satirical and therefore faux in nature and does not reflect the actions, statements or events of real persons. The opinions, beliefs and viewpoints expressed by the authors of The Sage Satire and forum participants on this web site do not necessarily reflect the opinions, beliefs and viewpoints of the The Sage News Network or the official policies of the The Sage News.
More from Paul Minton