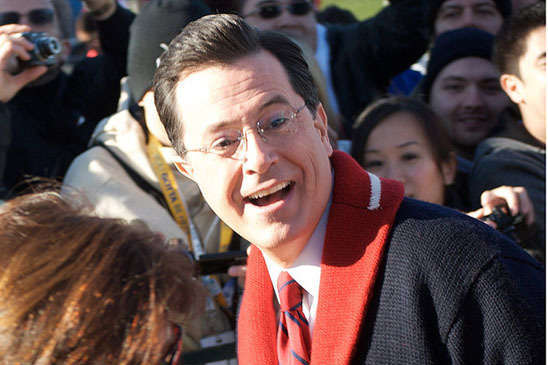 Stephen Colbert to replace David Letterman on The Late Show

(SNN) - CBS announced today that Steven Colbert of “The Colbert Report” will replace David Letterman as host of “Late Night.” The timing, if not the choice, is a bit of a surprise, as Letterman is not due to retire for at least a year. The announcement comes one week after Letterman’s surprise retirement announcement.

Rumors have flown about potential replacements and it is possible CBS wished to scotch them before everyone from Kim Jong Un to Pope Francis had been considered. Serious contenders included Neil Patrick Harris, Tina Fey, Craig Ferguson and, of course, Colbert himself. It is also possible the Tiffany network wishes to use the year to ramp up excitement about the future host.

There is a danger to such an early announcement as NBC found out a half century ago when they anointed a kid from Nebraska named Johnny Carson to replace Jack Paar, who quit unexpectedly. One problem, however, Carson was under contract to ABC and hosting a game show called “Who do you trust?” He would not be available for months.  Guest hosts filled in, and one, Merv Griffin, did such a good job, he threatened to overshadow Carson. Many thought he should get the gig. NBC solved the immediate problem by giving Griffin his own daytime show, and Carson finished off the controversy by being Johnny Carson.

What does Colbert bring to the dance? He’s bright, imaginative and quick-witted as he has shown both on “The Daily Show” and more recently on his own program. He has developed his skills as an interviewer, although he has operated on his own show as a character, not as himself.  One can assume that the blowhard ersatz right wing patriot will be put into retirement and a warmer, cuddlier Colbert will return. (Although the angry persona may reappear for faux commentaries, a la Carson’s "Floyd R. Turbo" character.)

Another positive is Colbert is a gifted self-promoter, even running for office when the mood—and chance for publicity—hits him.

The two biggest hang-ups are whether or not his fake persona has turned off too many members of his potential audience, and the fact that the competition for those viewers is tougher than ever. The success artistically and in ratings for his primary competitors, the two Jimmies, Fallon and Kimmel may make it a tough go.

Letterman's audience has aged along with the soon to be 67 year old star, and Colbert will need luck, hard work and good fortune to hold onto the oldies and bring in younger viewers. But at least the 49 year old Colbert is a familiar face to many.

Photo Some Rights Reverved by Mike Browne flickr photostream, The Sage nor this artivle endorsed. The original image can be found here.