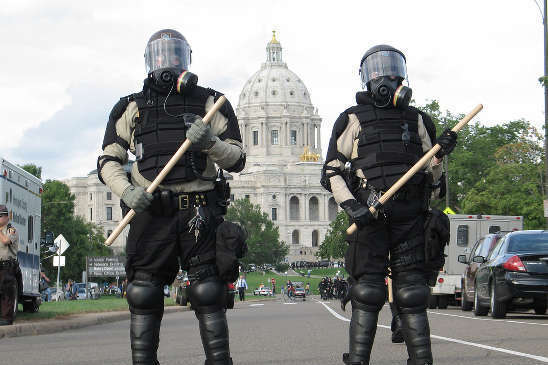 (SNN) - “. . . Again,” the male anchor insisted exhausted, “to all our viewers in Georgia, we ask everybody to calm down. Do not duck for cover and flood 911 phone lines with tens of thousands of reports of gun-wielding men at schools, malls, airports and Little League games. Those people are just honest, law-biding citizens, exercising their God-given right to protect you, the public, from the criminal element in our society and Islamic terrorists.”

“That’s right,” the female anchor added. “The hundreds of thousands of travelers and truckers, who are bypassing the state, have nothing to worry about. This is a whole new day. Violent crime in Georgia is officially a thing of the past.”

“And again, I specifically want to address all those people who have uploaded thousands of photos to Twitter, supposedly showing that their neighborhoods have been taken over by gun-toting street gangs.” He held up a hand and assured them. “The police have told us that they have no grounds to arrest anyone, because they all have permits. And everyone knows that criminals can’t get permits.”

“That’s right,” the female anchor added with a laugh. “So if any one of them asks you for all your money, tells you to transport drugs for them or demands sex, they’re just putting you on . . .”

Photo: Some Rights Reserved by Nigel Parry flickr photostream, The Sage nor this article endorsed. The original image can be found here.