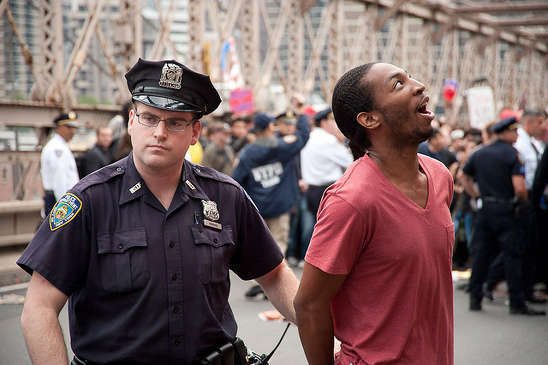 An NYPD spokesman refused comment saying it was an ongoing investigation. Several eyewitnesses, however, say the incident occurred when the singers approached uniformed policemen and, without provocation, began complimenting them.

The officers had just cleared a traffic jam near Central Park when the duo approached them and began uttering pleasantries such as “God Bless you,” “Wonderful job,” and “You guys sure seem nice.”

According to retired police sergeant turned choreographer, Oliver Krupke, of the NYPD’s storied West Side Division, this kind of behavior is bound to arouse suspicion.

“Neither one of the singers would produce identification when requested and instead responded, ‘If you don’t recognize us, we sure aren’t gonna brag,’” Officer Krupke said.  “They were lucky they weren’t charged with Felony Sassing a Peace Officer.”

It is the first arrest for Jake and Juliet Spulzinker, the real names of “Happy Face Honey Bunch.”

According to rock historian Grimace McDufft, “Happy Face Honey Bunch” began their career with a series of “answer” records that gave a positive spin to glum or depressing tunes written by Paul Simon.  A perky reworking of Fifty Ways to Leave Your Lover replaced Simon’s sour grousing with nutritional advice. Fifty Ways to Love Your Liver was followed by The Sound of Shlepping and Bridge over Bubbled Water, which celebrated hard work and carbonated beverages, respectively.

Jake Spulzinker met a pretty, smiling brunette named Juliet Blatz in 1974 through Christian Mumble, a dating service for God-fearing shy people who stammer, babble and drool around the opposite sex.  A Rolling Stone interview shortly after their marriage said the attraction was instantaneous, with Juliet claiming,  “He had me at ‘Mrrphphphfnglgg.’”

Dubbed "the most positive band ever in the history of Earth" by Popular Sarcasm magazine, their arrest comes as a shock to many, but not to Jake’s brother, Elliott Spulzinker, an unemployed cynic.

“Little Mary Sunshine and my grinning idiot brother are so nice it makes you want to puke. I knew someday they’d run into the wrong people and that attitude would get them in trouble.”

No word yet if the arrest will postpone an upcoming visit to Moscow where they plan to politely ask Vladimir Putin to “stop being rude to the Ukrainians.”

This is the second arrest of married entertainers in the past month. Ironically, Paul Simon and wife Edie Brickell were hauled away by Connecticut police for alleged disorderly conduct.

Unaltered Photo: Some Rights Reserved by Adrian Kinloch flickr photostream, The Sage nor this article endorsed. The original image can be found here.