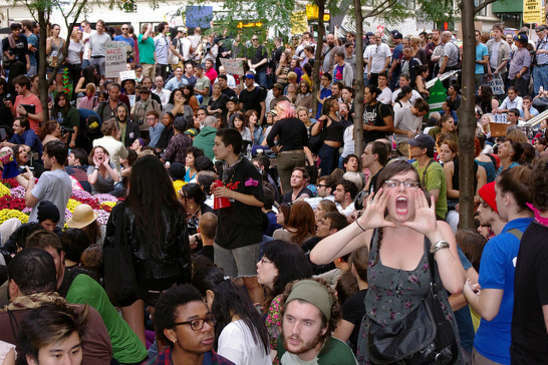 (SNN) - “Seven hundred thousand demonstrators,” the anchorman said proudly, “carrying homemade ‘the Rich Are the Only Minority It’s OK to Hate’ signs, chanted their appreciation for the Supreme Court’s recent, landmark decision.” He pointed. “And here are the highlights of what the spokesperson for the demonstrators said to reporters.

“The superrich want to thank the Supreme Court for doing the right thing without us spending 100s of millions of dollars to get them to do it, like we have to do with Congress.” She referred to her notes. “Finally, we, the smartest people in the country are getting the right to spend our hard-earned money the way we like, like everyone else in America.’”

In a jump cut, when the enormous applause settled down, she added, “To quote Sheldon Addleson, ‘Before, no one would even listen to us. But right after this decision came down, I was able to get all of the Republican contenders for the presidency in 2016 over to my place and share my ideas on how to make this country great again. And they actually listened!’”

Another jump cut. Again, after the crowd simmered down, she added, “We also want to give a shout out to the Republican Party for having the courage to stand up for us in Congress. Not only did they block every effort by Democrats to tax us so they can buy the 99% off with hand-outs, the Republicans gave us even more tax breaks, or what we call Affirmative Action for the 1%.”

The host returned and added off-handedly, “Since they were way too busy being job creators and country-builders, no rich actually took part in the demonstration. All the demonstrators were hired at minimum wage.”

Photo: Some Rights Reserved by David Shankbone flickr photostream, The Sage nor this article endorsed. The original image can be found here.