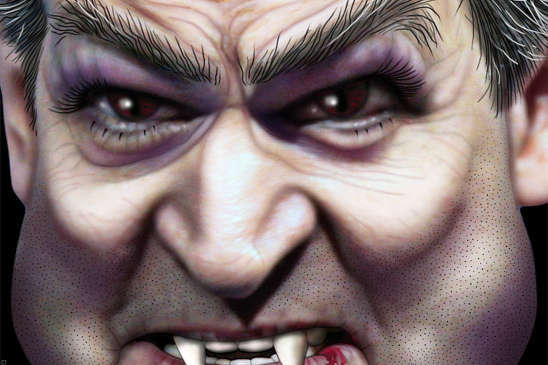 (SNN) - “For all of you who have just tuned in,” the anchorwoman said, talking as fast as she could, “here’s some background. Scientists have discovered that the vampire movies were right. That something in the plasma from young mice rejuvenates the cells of old, decrepit mice, so they can not only kick-ass on treadmills, but in the bedroom as well.”

“And unlike the no-nothing liberals in government,” her male counterpart said rapid-fire, “conservatives, all over the country, are taking action.” He held up his notes. “And here’s the latest.”

“On the floor of Congress,” the anchorwoman said, “Ted Cruz made a speech saying that the Obama administration knew about this all along. He’s entered a bill - the 107th attempt to save the country from Obamacare - to prevent Baby Boomers from sucking the actual life’s blood out of Millennials, like they’re already doing with Social Security and the national debt.”

“The NRA has just emailed all their hundreds of thousands of members,” the anchorman rattled on, “asking for additional donations. They’re pointing out that if the people aren’t armed and organized, all the blood-sucking carnage of that TV series, TrueBlood, will become an actuality.” He stared at the notes with a horrified look on his face. “And to buttress their case, they point out that in Florida and Arizona, where retirees dominate, they’re already passing local ordinances so the elderly can’t be prosecuted for helping teenagers party down, so they can drain their blood, after the teenagers pass out.”

“Fox News has just learned that, as the result of our coverage of this story, hundreds of young people, from all over the country are filing class-action lawsuits against blood banks, that gave them the blood of older people.” The anchorwoman looked up. “They say they just never felt the same after their motorcycle and texting-while-driving accidents.”

“And we’ve just learned that the RNC has just aired a new negative, anti-Hillary ad, to make this an issue in the 2016 campaign.” The anchorman looked up at the viewers. “And let’s face it, the only explanation for her not taking a public stand on this issue, has to be that she’s a plasma junkie. . .”