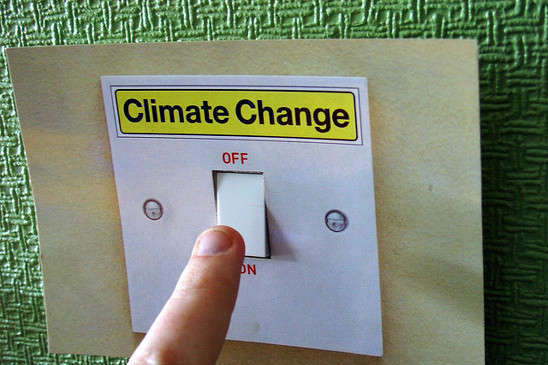 (SNN) - That’s right, I want climate change to happen on a massive scale and as soon as possible, like tomorrow! What’s that? I am completely crazy? Countless shorelines will be flooded? Cities wiped off the map? Millions upon millions of people will lose their homes and livelihoods? Well, I can’t argue with that, but hear me out first.

Even though science has come to an overwhelming consensus on climate change, the reality is that the oil and gas industry has a substantial number of politicians in their pocket and truckloads of lobbyists ready to spring into action at the first finger wag of their masters. Meanwhile, ordinary people are way more interested in drooling over what Kim and Kanye will do next. Not only that, but climate scientists have now agreed that there is little hope of stopping climate change from happening.

So why would climate change on a massive scale tomorrow be better than 50 years from now? Well, let’s start with those adorable climate change deniers, who constantly say stupid things on any media outlets they can find while oil stained benjamin’s are falling out of their back pocket. Presumably, some of them are just stupid, and that’s something we just have to live with, but many of them are doing it because of money or a political agenda. These people are more disgusting than a turd in a swimming pool. You may notice that many of them don’t have color in their hair anymore, so they understand very well, that they will not be around to experience the full effect of climate change. So why should future generations have to suffer because of these soulless Koch-suckers? Let climate change happen tomorrow at its fullest, just to see how the piggy’s stop squealing nonsense and start running for the hills trying wth all their might to carry as many sacks with dollar signs on them as they can.

Now if you are a Texan who has experienced the worst drought in history, which left your towns economy in ruins and your answer is to stand near a dried up water reservoir praying for rain… Again, that’s something we all just have to live with. However, if you are well aware of the danger that climate change poses and yet you still spend most of your free time strangling your couch with your beer belly, then you are kind of screwing over future generations. Don’t feel like doing something to fight the oil and gas industry’s destructive agenda? Would you rather take your boat out on a nice fishing trip instead? Well then, have fun tomorrow when you are fishing off the coast of Kentucky, wondering why you are catching so many “Ocean drive” street signs!

So let’s start a petition to bring climate change at its fullest as quickly as possible! Start burning as much coal as you can! Leave your cars on for the night and put a brick on the gas pedal! Go cut down some trees, build yourself a canoe and let’s get this party started! You don’t want you kids to see the world disappear under water before their eyes, so just do it yourself and tell them that’s how it always was!

Photo (unedited) : Some Rights Reserved by Twm flickr photostream, The Sage nor this article endorsed. The original image can be found here.