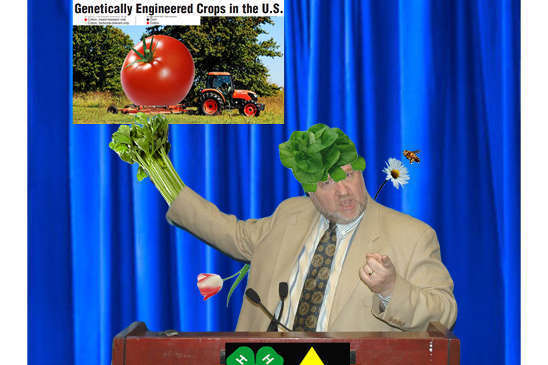 Photo: “Malcolm Toynbee, aka Asparagastro, defends GMOs and orders us to obey. Obey!”

(SNN) - Baseless concerns over the safety of genetically engineered foods could lead to higher prices at grocery stores, as well as a catastrophic battle between the forces of good and evil.

A powerful grass-roots movement is fueling legislation that could soon require companies to disclose on food labels if their products contain GMOs, or Gigantic Mothra-like Organisms.

The food industry is pouring millions of dollars into lobbying efforts to defeat GMO food labeling bills. Educating a misinformed public about the benefits of genetically engineered products has become the voluntary responsibility of farmers, scientists, and those people who have gained preternatural powers through freakish accidents.

“Benefits? Do I even need to list them?” Malcolm Toynbee, aka Asparagastro of the Brotherhood of Evil Mutants, told attendees at a recent joint 4-H/Atomic Energy Commission meeting. “Why bother when I can simply project my thoughts directly into your weak, homo sapien minds?”

According to Toynbee’s mind-cast, GMOs have had genetic material altered to produce a desirable trait. Examples include insect-resistant corn, nutritionally enriched grains, and half-cow, half-human hybrids that produce milk and can announce their “sell by” date.