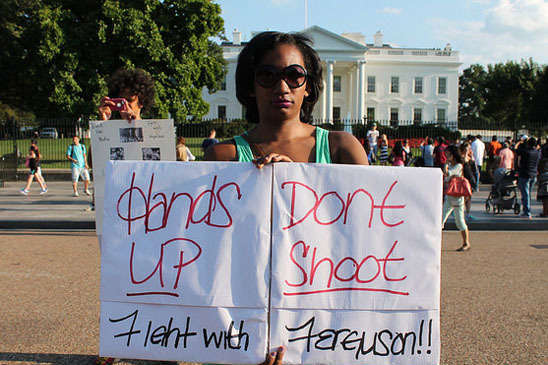 (SNN) - If anything good can come out of the killing of unarmed black teen, Michael Brown, by white police officer, Darren Wilson, and the subsequent outrage in #Ferguson, MO. and around the nation, it is that we have been given an opportunity to have serious, intelligent, and compassionate conversations, at the national level, about the disturbing trends toward police brutality, police militarism, governmental violations of citizen's rights, lack of transparency of police and government actions and procedures, and especially about race and class discrimination and how it all creates plights like Ferguson.

To be productive, we need to have these conversations with intentionality and mutual honesty and respect; and we must include everyone, especially those most affected by these social justice issues—those traditionally left out of this kind of national dialogue: minorities, the poor, the less educated.

We also must have access to unbiased and unrestricted information.

When it is considered an acceptable risk for journalists and photojournalists to endanger themselves regularly by traveling into global combat areas to show us what is happening there; how can Missouri Police and government leaders justify keeping traditional journalists out of the streets and skies of Ferguson—effectively causing a professional journalism media blackout of most street events and of an aerial view that would add perspective to events happening on the ground? How can they expect us to believe anything they say when they hide behind convenient excuses of "protecting citizens" while denying Americans the right and means of determining for ourselves what is really going on there? How can they justify confiscating camera cell phones from citizen journalists who film police actions and other newsworthy events? Who will protect us from police and government officials obfuscating facts and critical information?

While journalism media is not perfect, it is the watchdog we have tasked with giving us the information we need to see and understand what is happening in our world, to perceive our relationships to these world events, and to make informed decisions as to our responses. When police and/or governments control media, we see only one viewpoint; and contradictory information is (historically) replaced with propaganda. Without a free and unrestricted journalism media bound to ethics and challengeable by all the citizenry of a nation, there is no real freedom.

Policing and justice applied disproportionately to some while making an exception for others—especially where arbitrary categories like minority status or class is the deciding factor in how policing or justice is applied—will eventually cause an eruption of anger on the streets of the nation that treats its citizens so basely.

This is what is happening in Ferguson, MO, and we are all responsible.

We have been given the opportunity to address this wrong.

What is also happening in Ferguson is that the black community there is growing through its anger and grief and finding its voice. They are becoming the voice for all minorities and impoverished people in America. It is time for the rest of us to listen. It is time to listen to each other with empathy and to engage respectfully with each other’s stories.

In order to have this conversation we need journalism media to give us free, unrestricted, and unbiased access to all the information and voices we need to hear so that we can listen to each other—even when those voices challenge journalism's representation as often being biased against minorities and the poor.

We must all be willing to change if we are to honor what is happening in Ferguson, especially those of us most privileged in our society. We must become inclusive as a nation, and honor our Constitution by applying justice and opportunity equally to all.

My thoughts are with the family, friends, and community of Michael Brown during this time of grieving. It is my earnest hope that his funeral and memorializing be given the dignity deserved, and that his family and friends be wrapped in a consoling blanket of love and support. As our nation grieves with them, let us create peace with justice.

Here are some links to things you might not have heard about what is happening in and around Ferguson:

Google "Ferguson" and visit #Ferguson on Twitter to learn more about what's happened in Ferguson, MO.

In addition to writing for The Sage, Maye Ralston writes stories, essays, and books and blogs at Writing Heartland. She also volunteers as a board member of Midwest Writers Workshop. Learn more at about.me/maye.

Photo: Some Rights Reserved by Elvert Barnes flickr photostream, The Sage nor this article endorsed. The original image can be found here.