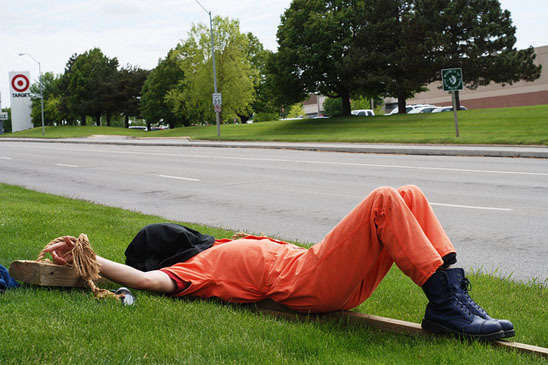 Torture: Good for What Ails You?

(SNN) - The National Torture Association, one of the United States’ most powerful and effective lobbying organizations, is launching a public relations campaign to change public perception of torture and inhumane treatment of prisoners.

“For too many years, torture has had a negative connotation,” a source not authorized to speak on behalf of torture or torture related industries, told us.

“That’s why we think a campaign to educate the public about the beneficial aspects of torture is overdue. We believe it is time for people to think of torture in a more positive light.”

The source indicated it was a mistake for the NTA or other pro-torture groups to merely counter critics by justifying torture as a “necessary evil.”

“Why think of it as evil at all? In far too many instances, people mistake procedures that are as beneficial as torture.

“Rather than sit on the sidelines, we will answer our critics. Take water-boarding. People don’t appreciate what it really is—a health treatment to irrigate the sinuses and clear breathing passages.

“It is similar to what one might receive at an upscale Spa. We have dermatologists who say it is also a scale removal procedure used for treating Psoriasis.”

When contacted by this reporter, the NTA said torture is a topic that could use a little lighter attitude.

“What’s a little liquid up the honker?” joked NTA Chairman and CEO Louis “Lou” Cretia-McEvil. “I irrigate my nasal passages when I get stuffed up and look how healthy I am,” Cretia-McEvil said, hocking up a snotball the size of a Buick.

Some media and advertising experts say pro-torture is a risky course for the NTA to take.

“It’s almost impossible to make torture seem like fun,” said Dr. Allan Privee, holder of the prestigeous Dick Cheney Iron Maiden Chair of Malevolent Behavior at the University of Kansas at Tennessee. “Research has shown that nothing can convince the public that tearing out a prisoner’s fingernails is a ‘cuticle repair technique,’” adding, “I like pie. Doesn’t everyone just love pie?”

A number of new slogans are being tested by focus groups and one will be selected as a new motto by the NTA, the source says.

“Torture: More fun than a barrel of piranha and a bloody foot!” “Torture: Are You Man Enough to Take It?”
“Torture—What’s the Big Fuss.”

A spokesman for the senior senator from Arizona declined comment on the torture issue but someone sounding a lot like John McCain picked up an extension and said “What campaign contributions? And don’t call me Shirley!” and then hung up.

Portions of this report were written while being water-boarded.

Image: Some Rights Reserved by Justin Nirman flickr photostream, The Sage nor this article endorsed. The original image can be found here.