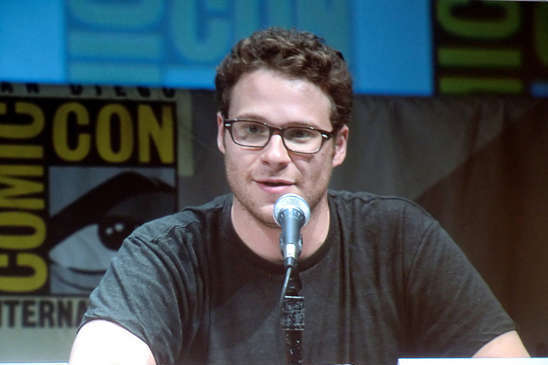 (SNN) - The State Department announced today it will hire Seth Rogen to make films to teach a lesson to countries bothersome to the US.  With the pre-release success of Mr. Rogen’s latest film, “The Interview”  in making North Korea go bonkers, the State Department realized a new weapon in its arsenal.  Marie Harf, State Department spokesperson, admitted their surprise at the level of rhetoric inspired by a film.  “We all know North Korea is crazy, but we were caught off guard by the level of screaming emanating from Pyongyang.  It’s not like war games are being played on their border,” she remarked.

Above: The secret weapon that attached North Korea.

Mr. Rogen says he is thrilled to get money to make more funny films.  “Frankly, I can’t wait to punk Russia and Putin”, he remarked.  Mr. Rogen goes on to say the script is being written as he speaks.

Although he hates to give too much away, he says the plot involves bears, vodka and the KGB.  The working titles being considered are; “KGB to Six Pack Abs”, “The KGB shows the Mob”, “Robbing Russia and Putinesque.”  “Putin is sure to love it,” he says.

Photo: Some Rights Reserved by Matt DeTurck flickr photostream, The Sage nor this article endorsed. The original image can be found here.