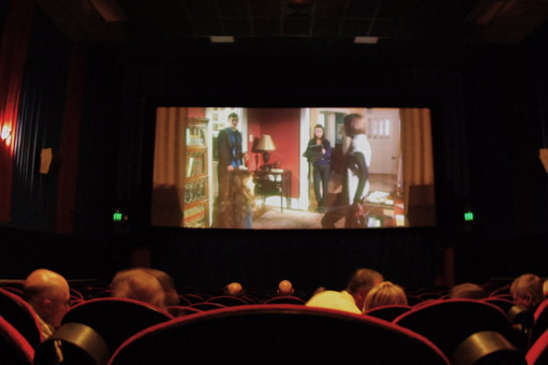 (SNN)  -  Here are the recommended must watch movies for mobile devices:

• Act of God is a cli-fi spectacular movie, Kickstarter-funded by environmental groups. In it, the Bible Belt and the conservative Southwest are suddenly pounded by hundreds of fifty-mile-wide super-tornadoes and ravaged by massive forest and prairie fires, until all that was left was one huge massive desert. Tens of thousands of prayer vigils were held, but it didn’t work. And neither did trying to escape to the North, because the Yankees suddenly saw the wisdom of the Second Amendment and shot at anyone who even got close. And in the end, the Lord finally got his message through the thick heads of famous televangelist and ring-wing politicians, saying it was His retribution for them not doing what He commanded: to be custodians of his best creation.

• Ecoterrorists is a blockbuster movie financed by the coal, tar sands, and fracking industries. In a montage of short scenes, the American people go from a country full of hard-working, happy, beautiful people to the destitution of a Third-World country, much like China used to be. And it was all because of delusions of a small group of environmental extremists, who force the government to passing laws that led to the destruction of the American economy. In the end, an elderly Obama begs the nation for forgiveness. But of course, it’s way too late for that.

• It Happened One Wednesday a crowd-funded movie by pro-choice advocates. In it, a preacher gave a pro-life speech at a rally in front of the White House, saying that only God can turn an egg and sperm into a human life. He even went so far as to say that life started with the creation of sperm, so masturbation was a form of abortion. And days later, when he answers the door in the middle of the night, he finds a canister of nitrogen-frozen eggs in a baby basket. In a note, the mother says she can’t afford the storage fees any longer. And in weeks, millions of canisters appear on the doorsteps of all the churches who proclaimed the same belief. Then millions of baggies of frozen sperm started appearing on the doorsteps of those churches. Having partitioners stand guard didn’t help either. The Pro-choice people just threw the baggies at them, from car windows, and sped off into the darkness. In the end, on the verge of bankruptcy, all the anti-abortion churches suddenly saw that the Bible really had nothing to say on the matter.

• Revenge of the Unborn, an Indiegogo-financed movie by Pro-Lifers, is a combination of Chucky and the vampire genre, where fetuses come back to life, dig their way out of landfills and terrorize women and the doctors who aborted them. Because of the blood and gore, viewer discretion is advised.

• Tale of Two Towns is a reality TV series funded by fans of the popular comedy podcast. The segments always start with the libertarian town, where business people, doctors, food suppliers, hazardous-waste producers, and average ordinary citizens told the world how wonderful it is to finally be free of the government meddling in their lives, and let the free market handle things, just like the Founding Fathers intended. There is always something amusing happening that doesn’t phase them at all, like vehicle traffic becoming nearly impossible, since no one feels like fixing the streets in front of their houses and drivers refusing to obey “previously imposed traffic regulations by dictatorial governments.”

In contrast, viewers then get to see the neighboring town’s progress in turning the town green. How they were turning the roofs of houses and businesses into power stations, harnessing wind energy, coming up with ways to recycle plastics and use them as building materials, and so on.

• Obamanation - Financed by TV evangelists, who expect to make billions with it over the next ten to fifteen years. This film shows how Obama is really the Anti-Christ and that the end time is finally here. But for just $250 USD per family, tax-deductible donation, the preachers will say a prayer for each person, and they could become one of the chosen few, who will ascend into Heaven and live for all eternity with the Lord, while the rest are left to burn in damnation. There’s a link to their store for the show’s memorabilia.

• Making a Passion of the Christ Movie is a documentary about the making of a real movie that showed all the snags, trying to make the scenes the way they were described in the Bible. In one, the lead actor, who was a stickler for authenticity to the point of gaining eighty pounds for his previous role, suffered a back injury when he tried to carry the twenty-foot cross to his own crucifixion. In another, he demanded to actually be nailed to the cross through his hands. But as soon as the Roman soldiers lifted the cross up into position, the nails tore through his hands and he fell to the ground, breaking his nose.

• In Frankenwheat, the CDC’s medical researchers try to figure out why increasing members of the public have developed the strange ability to repel mosquitos to the point of making them disappear from backyard barbecues and even whole neighborhoods. Eventually, they narrow it down to genetically-modified wheat, which was designed to decrease the use of pesticides. But then the modification makes its way into people’s DNA and things go terribly wrong.

Image (cropped): Some Rights Reserved by Sara Robertson flickr photostream, The Sage nor this article endorsed. The original image can be found here.