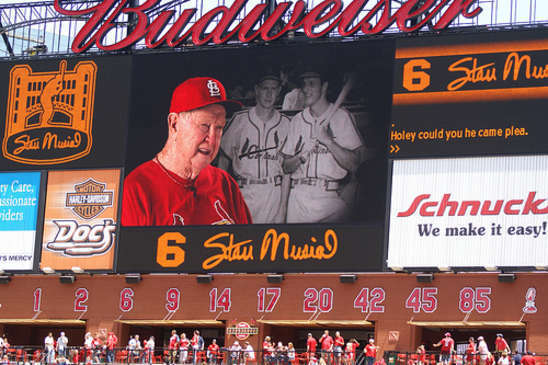 What My Old Man and 'The Man' Taught Me About Baseball

Photo: You know you made it when...

(SNN) - The first baseball game I ever saw was at the Polo Grounds in New York City. My Dad took me more years ago than I can remember.

The Polo Grounds was then home to the New York baseball Giants. The stadium is long gone as are the baseball Giants, who soon after skedaddled west to San Francisco.

Despite my young age, my father knew instinctively the correct moment for his son’s Right of Passage.

“Time for you to see a baseball game,” he said. It was all the explanation I needed.

All I knew about seeing a game was to  “root, root, root for the home team” and make sure Dad bought “me some peanuts and Cracker Jack.”

We root-root-rooted for the Giants and snacked as the ubiquitous baseball anthem suggested. But what I remember best to this day was Dad teaching me invaluable life lessons, with a little help from a visiting player.

When a certain St. Louis Cardinal approached the plate, I could see right away there was something wrong with him.  He didn’t stand like normal players do. He was all twisted around and scrunched, coiled like some sort of flesh and blood spring. I may have laughed at his stance. Dad noticed my reaction.

“That is one of the best baseball players you’ll ever see in your life,” Dad said.

“You mean one of the best players for their team, right?” I rationalized.

“No, one of the best players ever. You should admire him even if you don’t root for him.”

What Stan “The Man” Musial did next is lost to memory—he probably roped one of his 725 career doubles—but in my mind’s eye I can still seeing the Hall of Famer at the plate in his unique stance, and sense my Dad beside me.  I learned two things that have stuck with me ever since: Admire beauty and talent where ever you see it, and don’t be afraid to be “different” if it works for you.

Decades later I took my own two boys to several baseball games. One lesson they learned from me is that their Daddy should check the weather forecast before leaving for the stadium.

On this sunny June afternoon, I returned from the concession stand at Dodger Stadium, arms full of sodas and Dodger Dogs. The game was about to begin and when I reached their seats my oldest boy, John, sweat streaming down his face said. “Andrew (his brother) and I took a vote and decided we want to go home.” On the way home, the radio weatherman announced the high that day had reached 110 degrees.

The question now is, should you take your own kids to a major league baseball game. To that I say, maybe one, after that not unless you’re ruling class rich. Instead, see a minor league game.

A most recent vacation included a visit to Portland Maine, home of the beloved “Sea Dogs,”—reigning Double AA Eastern League Division winners and headed for the playoffs as this is written.

A ticket behind first base, equivalent to a major league box seat, set us back $9.00 each to see this Red Sox affiliate team play. If I were to choose to see the last place Boston Red Sox take on Canada’s Toronto Blue Jays this Saturday, equivalent seats would be $145 each face value, a mere 15 times as expensive.

My $9.00 got me a picture-perfect ballpark, close-in parking, and seats among 5700 other fans—many of them children. Concessions cost less, there were silly games between innings for the kids, and the baseball itself was good.

The lovely little Hadlock Field can’t match the Iconic Fenway Park for history or grandeur, but getting there is easy, unlike Boston’s traffic from Hell and a home team that’s gone back to breaking their fan’s hearts.

It is a fact that most professional sports, not just baseball, has priced itself out of the range of most every day fans. But a trip to a minor league park is a terrific bargain—and the money you save can pay for a fancy new wide screen TV to watch the major league Multi-millionaires play.

Unaltered Photo: Some Rights Reserved by Barbara Moore  flickr photostream, The Sage nor this article endorsed. The original image can be found here