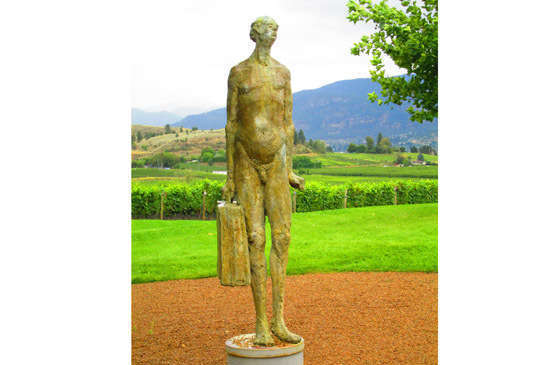 .. or Frank, his baggage and all of his manly parts.

(SNN) - Happily, sightings of nude males in BC’s Okanagan continue with the return of 30-degree temperatures, and a brief return to the valley’s “clothing optional” beaches. Tip: To find a nude beach in the Okanagan, just look for a pumphouse along one of the lakes.

More surprising than these more common nude males was the one I encountered while on a September “day-cation”. ‘Frank the Baggage Handler’ was standing outside Red Rooster winery, located on the Naramata Road. A postcard photo of Frank taken in winter shows him surrounded by suitcases, but his bags were nowhere in sight where I found him. Had they been stolen?

Frank is no stranger to the theft of personal items, or to insult. While standing in the roundabout outside of Penticton’s art gallery he had his penis detached and stolen. Appalled, friends at the winery raised funds through the release of “Cabernet Frank,” and his valuable part was thankfully restored.

It all began with letters to the editor of the Penticton Herald from residents protesting having to view Frank in the buff as they drove around the traffic circle. One local even went so far as to put ‘Depends’ on Frank. It was sometime after this that the shocking indignity to Michael Hermesh’s artistic creation occurred.

It turned out the missing luggage had not been stolen, as I feared. Frank was cloned in bronze after the restoration of his manhood, and this is the figure that hangs out at the winery. The original Frank, accompanied by his baggage and with all of his manly parts intact, is currently on a tour of Canada.

A funny thing about Frank – he always looks as though he just went for a brisk September swim.