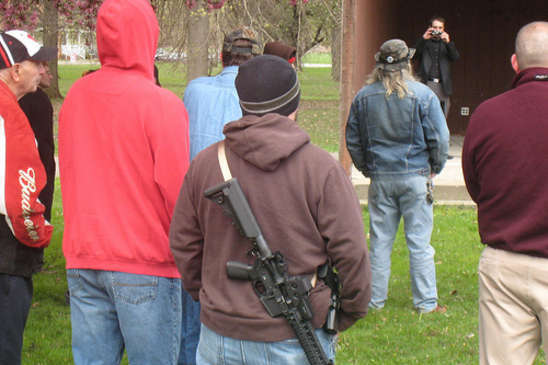 Packing Heat for the BBQ

Photo: Seems quite normal, doesn't it?

(SNN) - While more restaurant chains sign on to the 'no guns allowed' movement for the protection of their unarmed patrons, one restaurant is standing its ground.

Bobby’s Blazing BBQ with 5 locations in Alabama and plans to expand to Georgia, remains steadfast in welcoming their gun toting patrons.

Bobby Ribsinall, founder of the chain, explains, “Most of our customers are hunters and fishermen. They all carry to protect themselves while out in the woods. The woods are filled with bear, and the swamps with gators. We don’t expect them to lay down their protection just to partake in our BBQ.  Our unarmed customers don’t mind; at least I’ve had no complaints from any of the survivors. We’ve only had a few incidents and no injuries.”

When asked to elaborate on the incidents, Bobby R. continued. “We had two guys who came in from bass fishing at Big Bass Lake. After a rack of ribs and a few beers, they got to boasting about the size of their bass. One of my other customers is the record holder for the largest bass ever caught at Big Bass Lake. Well, one thing led to another and guns were drawn over who had the largest bass. Another level headed patron suggested a measurement be taken and the big bass issue was quickly resolved.”

Bobby indicated the only other incident was very minor, an altercation over extra hot barbeque sauce. There was a line at the extra blazing BBQ sauce table for those who prefer their BBQ sauce breathe fire. Customers can pour additional sauce on their food at no charge. A customer accused another of cutting in line and drew his gun. But, the line cutter just turned out to be his cousin Ray pulling a fast one on him.

When asked if Bobby’s Blazing BBQ had any service restrictions, Bobby remarked they had a strict, no shirt, no shoes, no service policy.

Unaltered Photo: Some Rights Reserved by Teknorat flickr photostream, The Sage nor this article endorsed. The original image can be found here