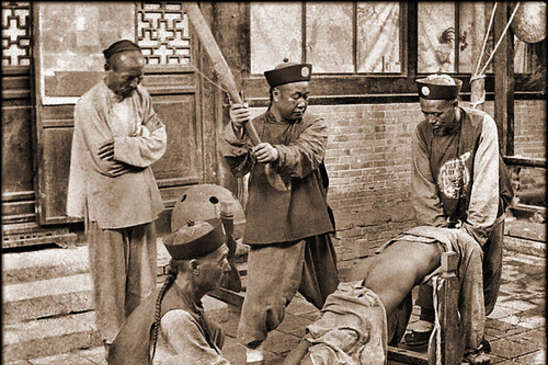 Is God a Switch Hitter?

Photo: How it was done back in the day...

(SNN) - According to Google, either Mark Twain or James Thurber said that quote, a witty commentary on the faults of statistics and stereotyping. Events in the news lately indicate the latest brace of groupings are those who’ve been whapped on the sit-downer with a tree branch as a kid, and those who have not.

I was switched. Furthermore, I had to cut my own switch. My Dad administered the corporal punishment. I learned several important lessons from the experience, including the role Irony plays in daily affairs.

Adrian Peterson’s alleged bloodying of his four-year-old son with a switch and the controversy following have brought it all back to mind. I’m sharing my switching experience because it comes with an O’Henry Twist to it--a “switch” if you will (sorry).

No mere spanking, my incident explores the very nature of crime, Justice, and the eternal yin and yang of guilt and innocence. The religious among you may find further support for belief that God watches over everyone. You may also ask yourself: Is God a snitch?

We were living then on an U.S. Air Base in Newfoundland. It was well after dark and I was late returning from an outing with some friends. I had been specifically instructed to return home as soon as I heard the base-wide siren than signaled sundown.

When I got home, Dad gave me the ominous order to go out and cut a switch.

The worst part of self-fetched switch punishment is the pressure to pick the perfect switch. Too thin and you’ll be sent out again. Too thick and it will hurt more. I avoided that by giving Dad a selection. He chose the thinnest one.

The next step was the exposing of the target area.  My spanking would be right on the Popo, with no cloth between skin and switch.

Dad did not attempt to terrorize me with a pre-spank recitation from Ezekiel. He did not, as they say in baseball, swing for the fences.  He did not unleash tennis player-style grunts as he swung. He did not tee it up nor take a Mulligan.  It hurt some, but no skin was broken, no blood was drawn.

To avoid collateral damage, Dad, a former WWII bomber pilot, hit the target within the expected “circular error probable” with every stroke. After a while I produced a tear or two and the spanking ended immediately. My tears were probably from the indignity of the event as much as the pain. Dad left and I re-dressed and went to my safe haven.

An hour later, Dad, Mom and I were at the dinner table as if nothing had happened.

I had an extra cushion under me. My parents remarked how it made me look taller.

My parents were not sadists. I believe to this day the spanking was more ceremonial than designed to inflict pain.  I was lucky in that what I experienced was different from the savagery of those who beat their children for whatever sick reason they might use to justify it.

This was the last time my Dad ever took a hand (or switch) to me. I swear I cannot remember if he ever spanked me before that day, with or without implements.

I’ve never been spanked since. S&M would just make me giggle and if anyone tried to Nipple Clamp me, they’d get a knuckle sandwich. No wait; they’d probably like that.

I remembered something too late to benefit me. On Sundays there is no signal at sundown. How could I be expected to come home on time if there was no siren to warn me?

A clear miscarriage of justice except for one little detail.  My friends and I were off in the woods practicing a new, fun activity known as “playing with matches.” We started fires using various fuels and fire beds.  It was “just for fun,” mind you.  We were not practicing to be arsonists. We put each new blaze out. But it was an accident waiting to happen.  Nobody ratted. My friends had gotten away with it.

I had been punished for a crime I did not do while a crime I had gotten away with went unpunished. I’ve been conflicted on such matters ever since. Does God have a sense of Irony?  Should I live a moral life because bad deeds create their own rift in the Space/Time Continuum? Should I lob Woody’s people a call and see if I can pitch “Crimes and Misdemeanors II”?

If my punishment left no physical mark, its memory left a psychological one. To this day, I have a mortal fear of yard work.  The Allman Brothers “Whippin’ Post” sends me screaming from the room. Don’t even think of putting Reddi-Wip on my pie.

I still love my late parents like crazy. They were deeply moral people and whatever Dad or Mom (who usually played Good Cop) did raising their only child, was done out of love.

One lifelong lesson I learned was best expressed by Robert DiNiro as Jimmy Conway in “Goodlfellas”:

“The two greatest things in life, never rat on your friends, and always keep your mouth shut."

Unltered Photo: Some Rights Reserved by Ralph Repo  flickr photostream, The Sage nor this article endorsed. The original image can be found here