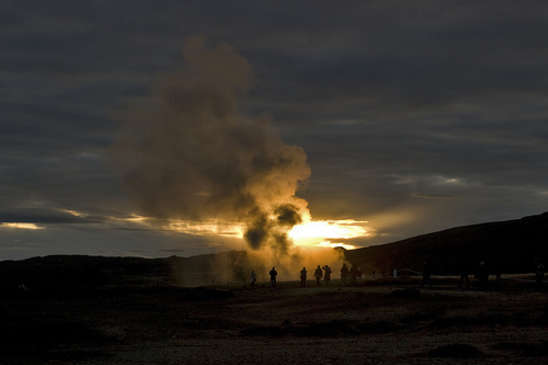 (SNN) - The head of Iceland’s volcanic team, Dr. Molten Igneous, announced the completion of their work on a new volcano naming system.  With another eruption threatening chaos for airlines, they decided the time was right.  “We’re tired of the news reporters massacring the Icelandic language.  The names of our volcano’s cause more trouble than the ash they spew into the sky”.

With 30 active volcanoes, the team expects the job to move along about the speed of lava.   They are considering a couple systems.  One is more descriptive, retaining a bit of the name itself.  Dr. Igneous says, “We’ve come up with EyeCandy for Eyjafjallajökull, DaBunga for Bardabunga, OftenGrim for Grímsvötn, Skullfire for Skaftáreldar and KittyKat for Katla.”

In addition, Dr. Igneous says the team is also considering a system similar to the ones for hurricanes.   In this system, the names under consideration are Eileen, Bob, Ginny, Skinner and Kathy.  Dr. Igneous indicates his preference for a third system, which also equates to the amount of chaos expected from each volcano.   Examples include Bob Floods, Eileen Plane Eater, and Skinner the Destroyer.

Unaltered Photo: Some Rights Reserved by Berit Watkin  flickr photostream, The Sage nor this article endorsed. The original image can be found here