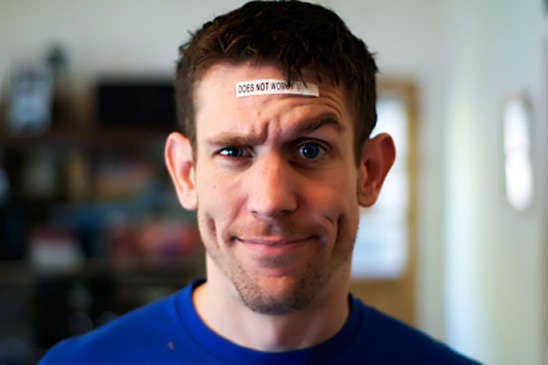 (SNN) - You’ve got a problem getting your TV and remote in synch. Who in your household should you call? Do not under any circumstances ask a Girl Guide for help. Recently, a group of Girl Guides reported a problem with the lights in their meeting room and were shown that they needed to flick the switch. Best to ask your husband or your son for help with entertainment technology.

According to American humorist Dave Barry, this goes back to our caveman days. Millions of years ago, Dave says, some primitive guys were watching their wives drag a dead mastodon to the food preparation area. “It was exhausting work; the guys were getting tired just WATCHING. Then they noticed some large, smooth, rounded boulders, and they had an idea: They could sit on the stones and watch! This was the first in a series of breakthroughs that ultimately led to television.”

The wheel wasn’t invented until sometime after this. Ideally, the invention of the GPS would have followed soon after. Had GPS been available in biblical times, Moses would not have spent 40 years wandering in the desert, refusing to ask directions.

To our GPS, DVD, and PVR my husband feels an emotional attachment, but technology in the kitchen is excluded from this. To a couple in his office he once admitted that he’d never learned how to use our microwave.

The man was incredulous. “You don’t know how to use the microwave?”

“I mean, I don’t know how to use the probe,” my husband explained, suddenly embarrassed.

“Ohh, the probe,” the man laughed. “I don’t even want to hear about the probe!”

Women love technological advances in their areas of interest as much as men do. It was me who insisted we needed a probe. And this, too, goes back to our cave-dwelling days. Getting up at dawn, after building a fire we’d go to our cache at the back of the cave to get chunks of meat to cook on a stick, only to find our food was frozen solid. It was frustrating.

I’m convinced that if not for our ancestral memories of having to wait hungrily for the sun’s rays to defrost our food, microwaves would never have caught on.

Image: Some Rights Reserved by David Goerhing flickr photostream. The Sage nor this article endorsed. The original image can be found here.

DISCLAIMER: The above article is provided for entertainment purposes only and the article, image or photograph held out as news is a parody or satirical and therefore faux in nature and does not reflect the actions, statements or events of real persons. The opinions, beliefs and viewpoints expressed by the authors of The Sage Satire and forum participants on this web site do not necessarily reflect the opinions, beliefs and viewpoints of the The Sage News Network or the official policies of the The Sage News.
More from Lydia Farrell