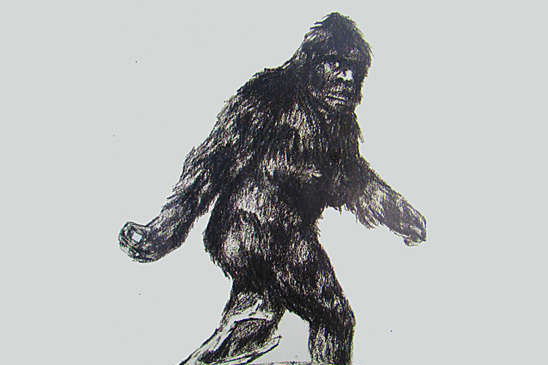 A Journey to Squamish, B.C. in Search of Big Foot.

“At first I thought it was a Sasquatch but then I thought for a second… hang on, there’s no such thing as a Sasquatch! So it must be an ostrich.”
– Richard Fortin, in a post following the M. Lamont video.

(SNN) - This past week, after discovering a recently posted video which would seem to show a sasquatch crossing a glacial slope, the next morning I headed out for Squamish, B.C., to see what I might find. Through Facebook, publisher Brian Hahn learned of my proposed piece for The Sage - and he responded, “I’m convinced.”

I’ve been convinced ever since my dad took me in the early 70s to see the Roger Patterson film of a female sasquatch crossing a sandbar. What if I actually saw one on this trip?

I wanted a close-up above all else, but I stopped myself from attempting to catch a possible member of the sasquatch species emerging from a local bar at closing time. Taking the video while on a hike into the incredible spires of the Tantalus Range near Squamish, M. Lamont quipped that it was a good thing they had some beers along, to lure the figure over. Being as it was at a distance, they couldn’t though.

Beer aside, sasquatches are reported to have a taste for snuff, literally, as indicated by a well-documented encounter with a family of sasquatches near Lund, BC. Lund is located several hundred kilometres up the B.C. coast from where I began my search. As it was, taking the recently opened Sea-to-Sky Gondola 2800 feet closer to the remoteness of the Coast Mountain spires above Squamish, I had neither beer nor snuff for bait.

The only sasquatch I found on going up into the mountains was in a sketch posted at a lookout, which is accessed by a gondola ride and then crossing a suspension bridge. Denied the opportunity to hear the typical response to anyone claiming to have seen a sasquatch – “And what were you drinking at the time?” – I headed for home with a photo of this sketch.

Approaching the turn-off to Harrison Hot Springs, I made a last-minute decision for a side-trip as there have been many reported sightings in that area. I found four carvings of sasquatches there, but I still preferred the sketch, as it is much like the female in Patterson’s 8mm clip. Two carvings resembled an infant Chewbacca. The other two looked like Harry from the movie, ‘Harry and the Hendersons’.

I wondered how I might feel should I ever encounter a sasquatch? I then wondered what that experience might be like for a non-believer? Recently I saw a news segment about a family faced with another of life’s great mysteries. It included a comment by the father, a die-hard skeptic, describing coming to accept the incontrovertible proof before him of what had been impossible for him to believe. Of that moment he said: “You could have poured my brains out my ears.”