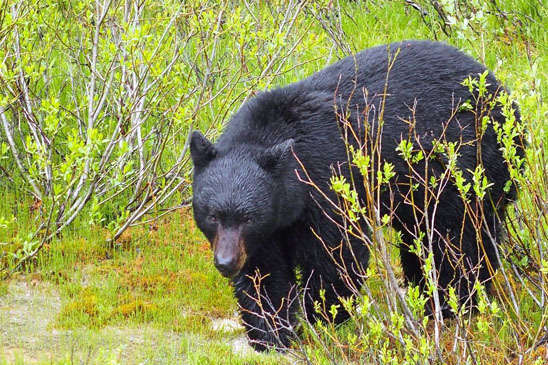 (SNN) - Want to have a close encounter with a bear? My suggestion would be to do what a BC Tourism employee told us they did recently on spotting a bear while out hiking in BC’s Kootenays – get out some food. Fortunately for them, the bear did not become confrontational.

What food could be better for attracting bears than homemade deer salami made with liquid smoke flavouring? It was for this reason that the car was only metres behind us as we stopped, on route to the Kootenays, at a remote picnic area for a lunch of crackers, cheese, and deer salami.

My boyfriend and I don’t relish getting up close and personal with bears. Upon encountering a bear last month, we didn’t want pictures or a good look at the animal. It was warning enough that, while I was out of sight up the path, the bear had been staring intently at Rob. Best not to make eye contact we correctly felt, and we immediately left the area.

Needing to fatten up for hibernation, a bear might find it hard to resist an easy meal close at hand. That meal might be your picnic, or it might even be you. This past spring in Alberta, a Suncor employee was killed after she exited a PortaPottie (and I’ve been told partially devoured) by a black bear just recently out of hibernation.

As I told the BC Tourism employee, while she’s right that the majority of black bears are non-confrontational, we don’t know that the bear encountered is not a “rogue” or an extremely hungry bear.

From the ‘Globe and Mail’, May 7, 2014: “A large black bear killed a Suncor Energy Inc. employee Wednesday while the individual was at the company’s main oil sands operation.” “The victim was a 36-year old female…”

Good advice comes from Suncor’s executive vice-president, Mark Little, in a statement after the tragedy: "All of us need to focus on personal safety and I would urge everyone to be extremely vigilant in dealing with wildlife."