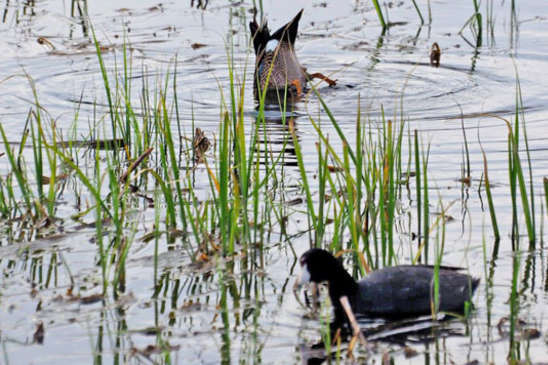 Where do Birds go when it Rains?

(SNN) - Where do birds go when it rains? Google this and you will find an almost endless list of posts from people around the world who wonder what happens to birds during a downpour.

I was shocked on visiting a bird sanctuary the day after a rainstorm to find two dead, orange and ugly chicks lying side-by-side on a footbridge, their eyes covered over by a bluish membrane. Apparently nest-mates, they were American coot chicks, also known as Mud Hens.

How these two naked chicks came to be out of the nest is a mystery. What is known is that the chill of wet skin is dangerous to birds, which is why their feathers have a certain amount of water-resistance, causing raindrops to simply roll off.

“Nice weather for ducks,” my grandmother would say when days of rain came. While not ducks, as water birds coots have highly water-resistant feathers, once they get feathers.

Birds take refuge from the rain in the same place they go for shelter at night. I was once sitting against the trunk of a large spruce tree, admiring the lights in the valley below as dusk was falling. The number of birds that tree was home to was surprising.

The darker it got, the more welcoming sounds there were as each bird arrived back at that dense tree, presumably going to the branch that had its special spot. It was quite dark when the last one was heard heading for the tree, peeping from the fear of being nabbed by an owl already out on the hunt.

Had it begun to rain during the day, the birds would have ceased their activities and returned to the home tree. As they flew, a third eyelid under their regular two layers of eyelid would protect their eyes from the rain. This nictitating membrane, as it’s called, is the same one that covered the dead chicks’ eyes.

And people, where do they go when it rains? In Seattle, they go to coffee shops.