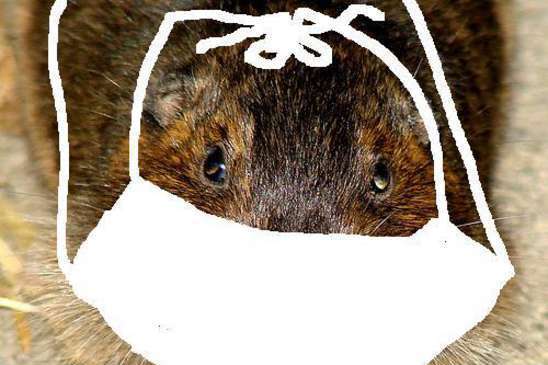 You Can't Get Ebola from a Gopher

We’re scared. We’re all scared. But nobody is as scared as my beloved Aunt Millicent and her husband Uncle Erply. Here’s a letter I recently sent that I hope will calm their fears and might just be some comfort to readers' relatives, too.

Sorry for taking so long to get back to you. Dipping your letter in disinfectant before you sent it blurred many of your words, and that caused the delay.

But in short--no, I don’t think you and Uncle Erply have Ebola.

You said you are sure you have Ebola even though neither of you has been to a doctor since 1996.  I know you trust your own medical skills, but self-diagnosis based on tea leaves and the tone and resonance of Uncle Erply’s “window-rattling farts” (your term) just aren‘t proof.

I called the Centers for Disease Control about some other worries you mentioned. They said you absolutely could not catch Ebola from watching news on CNN, CTV or Fox. (They wouldn't comment on MSNBC, because like everyone else, they never watch it.)

So be assured the virus isn’t being beamed into your home by DirectTV.  I know Satellite-Transmitted Ebola is listed in that “135 Crazy Diseases Nobody Heard of” article, but Buzzfeed has already admitted it was a joke and apologized.

I know how you both love your classic rock music; so let me put your mind at ease on that subject.  The Who is not leading the investigation into the worldwide spread of Ebola.  I’m sure they do care about humanity, as you mentioned, but it is WHO, the “World Health Organization” that’s involved, not the classic rockers.

On a related note, the band Foo Fighters have not stopped fighting Foo to take on Ebola. That’s a rumor started by David Letterman. In fact, I doubt they’ve ever fought Foo, much less Ebola.

I don’t know where you heard this, but you don't get Ebola from words that rhyme with it. So tell Uncle Erply it's still safe to take his old records off the shelf and sit and listen to them by himself. His antique Victrola didn’t give him Ebola.

Nor did you catch it from your favorite cheese. So you can keep eating those grilled Gorgonzola sandwiches you love.

Finally, I’m sad to hear you threw out your crayon collection because you thought Crayolas carry it. The CDC, WHO, and some nice attorneys from Crayola LLC all convinced me they do not.

I’d list more examples, but it’s a proven fact that too many puns can make anyone sick.

Lastly, I’d advise against draining your pool and replacing it with an Ebola shelter. The estimates you got sound a little high, especially since the Gophers “have already gotten a good start” on the excavation. And no, you can’t get Ebola from a Gopher.

At least not yet.

Altered Photo: Some Rights Reserved by Dawn Ellner flickr photostream, The Sage nor this article endorsed. The original image can be found here