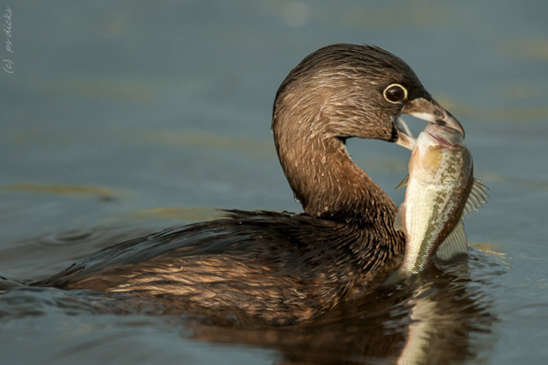 Don't Talk with Your Mouth Full

(SNN) - I set out on a photo expedition last weekend, and found a wildlife photographer. Perry Dicks from Vancouver shared from his camera some stunning shots he’d taken of birds. One was an instant favourite – Pied-billed grebes are known to eat small fish, and this one had a mouthful.

Birds have their own language. One way to experience this for yourself is to take note of a congregation of birds about to leave on the fall migration. Their excited chatter over this upcoming event is so loud it can be heard from a distance.

Birds also speak our language, but I had no idea they would speak it to each other. One day, I was at a small family-run zoo that had two parrots side-by-side in cages. Posted next to each was the long list of words in that bird’s vocabulary. One of the zoo’s operators was nearby and I mentioned my amusement over the variety of swear words on the lists. She told me that when the zoo is closed she often hears the two parrots hurling insults back and forth at each other.

Ravens in captivity have been taught to speak, and wild ravens are also known for their ability to communicate with each other. I would sometimes hear this while walking my neighbourhood in winter. “Gronk,” a raven on top of a pole croaked as I approached. “Gronk,” I’d read, is a raven’s way of saying, “Now there’s something unusual.” I tried to take it as a compliment.

When winter is harsh, Ravens will leave the forest due to the garbage that can be scavenged in cities. Along a walking path I frequented was a raven that would imitate a barking dog, and also the sound of a nearby dumpster lid slamming.

Birds have fascinated me since I was a young child. Recently I was telling a friend how I used to visit a pet store just to observe the parrot. She said she has done the same thing, with a cockatoo. Carol said the first time she went to the store she had a cold and a bad cough. When she went back some time later the cockatoo apparently recognized her as it started to hack, imitating the cough she’d had on the previous visit.